Documentary - For No Good Reason 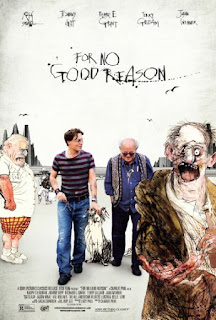 A series of documentaries ran on Sky Atlantic, starting with with the Johnny Depp hosted look at the artist Ralph Steadman. Our own artist Susan Omand fangirls her way through it...


When I heard that there was a documentary about Ralph Steadman, yes, I was interested. By the end of that documentary I was wrung out, in tears, inspired and ready to take on the world.

Let me explain. Ralph Steadman is an artist. THE artist. The one that did the drawings for Hunter S Thomson. OK that’s enough explanation because, if you don’t know who Hunter S Thomson is, there is no hope.

Anyway, back to the documentary. Right from the start as the credits started rolling and I saw they had used that instantly recognisable font I knew I was in for something special. Then the names started to appear over a panorama of art, film and studio related close-ups…. “featuring Ralph Steadman, Johnny Depp” (oh hell yes) “Richard E Grant, Terry Gilliam, Hunter S Thomson, Jann Wenner (founder of Rolling Stone magazine) William S Burroughs and the voice of Leonardo da Vinci…” wait…what? If you’re going to list the rock and roll of cool, that’s pretty much it right there. By now I was more than interested.

Johnny Depp, who has played Hunter S Thomson and knows Steadman, acted as interviewer but, as you might expect, this was no ordinary interview. Mixing vintage footage, new handheld POV film and scenes of the artist at work now in his studio (now being 2012) we get the full story of gonzo journalism, from Steadman’s first meeting with Hunter S Thomson at the Kentucky Derby in 1970 to that fateful day when Thomson took his own life and, as Steadman puts it “took away the raison d’être”. We hear about that first meeting, the week-long binge, the instant chemistry that meant the birth of a type of journalism that had never been seen before – as Steadman says in the documentary, he saw in pictures what Hunter S Thomson saw in words. We find out about Steadman being sent a manuscript out of the blue and asked to do a dozen drawings for the book… Fear and Loathing in Las Vegas. Yes, that book.

We get all the stories first hand – like the time they went to cover the Rumble in the Jungle and Thomson sold the tickets, bought a huge bag of grass and went swimming, so Steadman watched it at the bar and did the pictures anyway or the time they went to the Americas Cup and found out it was cancelled because of the weather, so Steadman wanted to spray-paint F*** the Pope on the side of a boat and Thomson set off a flare in the harbour, causing mayhem and much damage… the rock and roll lifestyle that happens when two people who want to push the boundaries get together. Because that’s what they did. Steadman maybe even more so than Thomson, because his wasn’t drug fuelled, it was experimentation for the sake of it. The freedom that Thomson gave to Steadman, or more appropriately, the freedoms Steadman took from Thomson’s writing gave him an edge that was missing from his previous cartoons when he did freelance work for the likes of the Telegraph.

But the documentary was about more than this seminal partnership. Intercut with the brilliant vintage footage, we get to see the artist at work, creating paintings on cartridge paper with Indian ink right there in his studio. A few flicks and splashes, manual airbrush, scraping back gesso, this is a man who can paint. This is not accident. This is technical genius. This man is an artist. As he says “If I know what’s going to happen before I start, then what’s the point of trying”. He quotes Picasso as one of his biggest influences, which I can understand, but also makes mention of Rembrandt as being the most “enigmatic and enquiring”, referring to the hundreds of self portraits Rembrandt did as a way for Rembrandt to document himself grow older. That was a revelation because I hadn’t considered that aspect before. Steadman even wrote a book from the personal viewpoint of Leonardo da Vinci because he felt then that the “experts” couldn’t question it.

Steadman is a man, an artist that learned to draw so that he could use it as a weapon against authority. He used his art as an object of protest. He set out to BE special, to do something special, to change the world. If you have any interest at all in art, in journalism, in doing the most you can with your life and being all that you want to be, you need to watch this documentary. If you have no interest in any of that, watch it anyway… For No Good Reason.