TV - House And The Social Issues 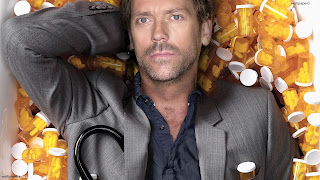 Steve Taylor-Bryant grabs his Vicodin and disappears into Gregory House's mind today. Now it's the social consequences of addiction...


When I got very personal during my tribute to the late John Spencer about my own addiction issues, I didn’t cover an important part of the problem. That problem is the effect that your addiction, and the moods you go through whilst in the grip of your drug of choice, has on those around you. Loved ones, friends and colleagues, even random strangers all fall victim to vile outbursts, abuse of both the mental and physical persuasion, and the love and care that those who know you have for you weighs heavy, near breaking point, as they try and rescue you. The amazing part is that the ability to still function, to go to work, to be creative in your thinking, remains at all.

Never before has the issue of addiction’s effect on others ever been covered in such detail in a television show as they were in House. Hugh Laurie's Doctor Gregory House was an addict of Vicodin, a ridiculously strong pain medication, occasionally meddled with Morphine, and his behaviour was tolerated purely because of his genius. He saw off detectives hell bent on ending him, bosses that thought they could control him, but his true friends put up with the torment due to their love of him. His team changed over the years, with those exiting citing their happiness of being rid of the stress, but Doctor James Wilson and Doctor Lisa Cuddy stayed to the bitter end.

Wilson, played by the remarkable Robert Sean Leonard, was the butt of the joke. He often tolerated more abuse than any man should, he occasionally enabled House, he got in trouble due to House forging prescriptions in his name, he lost loved ones through House's actions, and the whole time all he wanted was a friend, the return of the love he showed. When Wilson was diagnosed with cancer, House is devastated and he goes to extreme lengths to try and make up for the trouble and anxiety he has caused over the years, faking his death, so he can avoid prison and spend his time with Wilson before he passes. This was the touching side of House, a problem many addicts have in showing, but proves that on occasion the bite of drug abuse can be overcome, even if in extreme circumstances.

Lisa Cuddy also got it rough. Lisa Edelstein (from The West Wing) portrayed Cuddy, the Dean of Medicine and Chief Adminstrator at the hospital who, apart from just being House's boss, is also in love with him. After trying unsuccessfully with IVF to have a child and miscarrying for the third time, House launches into a tirade of abuse about how she would have made a terrible mother, yet she still stood by him. Eventually Cuddy becomes the partner of House. After all the damage he has caused both emotionally and physically in his time at the hospital, it was a brave move to show him that she really did love him. How does he repay her? He avoids her whilst she gets treatment for kidney cancer, takes Vicodin and eventually shows up to support her and, when she breaks off their relationship he drives a car through her house, leaving her having to quit her job and move to get him out of her life.

These are just a few examples of an addict’s actions and how they affect just two people in his life. Across the eight seasons there are many, many more, and an awful lot of people are traumatised by the abrasive characteristics of their friend, mentor, or physician. Hugh Laurie won many awards, and garnered a huge fan base, portraying Doctor Gregory House. Many thought the examples of his behaviour were fictitious and, whilst many of them were extreme examples, unfortunately to some of us they were all too familiar.