TV - My House, Your Holmes. 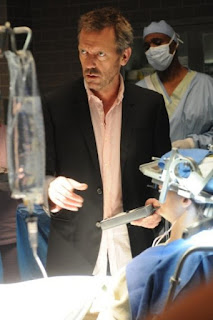 Steve Taylor-Bryant grabs his Vicodin and disappears into Gregory House's mind today. First up - My House, Your Holmes...


The best modernisation/reboot/adaptation of Sherlock Holmes stars a posh Englishman. No, not that strange named one Bendy Cucumberpatch or whatever, I'm talking about Hugh Laurie. "What do you mean? Laurie didn't play Sherlock Holmes" I hear you scoff, well technically no, not Sherlock in the traditional way if there is even a traditional way any more (Elementary I'm looking at you!) but in a subtle way that, to me, allowed for a modernisation without ruining Conan Doyle's legacy and inflaming Twitter. House!

First there are the obvious comparisons. For Holmes read House, Watson is Wilson, he lives at no 221 in flat B, he is a detective of medicine, plays music, is an addict, his first ever patient was an Adler woman, and he was shot by a Moriarty! But it is the detective work the show became a hit for.

Gregory House is a troubled man but a brilliant mind. He takes the cases other Doctors cannot deal with or cure, a nod to Holmes solving the cases that regular detectives are stumped by. Throughout the show's eight season run there are Sherlock Holmes references embedded in the story telling.

House's game 'Itchy Foot' is a tribute to Sherlock Holmes 'The game is afoot' which he in turn stole from Shakespeare. In another episode, Failure to Communicate, the riddle of the room and the polar bear given to his team by House is taken from Young Sherlock Holmes. There is a rare medical text by Dr. Joseph Bell in one show, the man who Conan Doyle based the Holmes character on in the first place, and 'How often have I said to you that when you have eliminated the impossible, whatever remains, however improbable, must be the truth?' from The Sign of Four is the basis for all House's differential diagnosis. House's limp is in reference to Watson’s war wound and Wilson tries to get House off Vicodin in the same way that Watson apparently weaned Holmes off opiates. Holmes love of classical music and uses the violin to think or wind down, where House has his guitar, harmonica or piano and love of rock and blues music.

Medical dramas of varying standards are nothing new and have been on television for decades, but what is rare is to find one that can be this clever, to have so many characters intertwine and yet still be about one man. Whilst Dr. James Wilson is the obvious John Watson tribute, it is the team of younger doctors that House surrounds himself with that become the true sense of what Watson personified, often acting as sounding boards for House, the target of his frustration and rage, the constant companions.

The writers of House have created a modern day medical mystery, with clever plots and believable outcomes, modern equipment, a modern facility dealing with the internal politics of a modern facility, and yet their inspiration is lifted straight from the 1880's. Jeremy Brett played my definitive interpretation of Sherlock Holmes, arrogant, intelligent, almost dangerous to himself and others. Hugh Laurie's performance as Gregory House is every bit as smart.

Let's not forget there is also a link to another modern incarnation of Sherlock Holmes with Hugh Laurie's series 'Fortysomething'. 'Fortysomething', a 2003 UK television series starring and directed by Hugh Laurie as Paul Slippery a doctor facing a mid-life crisis. Dr Slippery has three sons one of whom is portrayed by none other than Steven Moffat's Holmes from Sherlock, Mr Cucumberpatch himself.