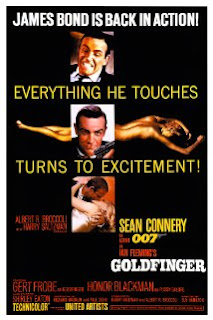 As part of our look back at the films of James Bond, ahead of the SPECTRE release, Stuart Mulrain remembers Goldfinger....

“Good morning Mr. Bond. For once you’re exactly where I want you!”

With Dr. No and From Russia With Love, Broccoli and Saltzman created a popular and successful spy thriller franchise. With Goldfinger they created a phenomenon! It is the film that is generally considered by most fans to be the best film in the series, the quintessential Bond film.

When you think about everything that is iconic about Bond, odds are they came from Goldfinger or have their origins within the film. If you look at most Bond parodies, they usually pay homage to something from Goldfinger, be it Arnie’s Tuxedo under his wetsuit in True Lies or a James Bond-esque figure strapped to a table in The Simpson’s episode You Only Move Twice.

It’s easy to imagine that the key word in the production office on this one was “BIGGER”. There is undeniably something larger in scale about Goldfinger that wasn’t there in the previous two entries, both on screen and in the way it was marketed to the public. By todays standards it’s all relatively restrained and innocent, but you can tell EON were clearly throwing everything they could at it and it’s a strategy that paid off for them.

The Bond films have a history of going bigger and bigger before the inevitable scaling “back to basics” that follows. Given what followed in Thunderball and You Only Live Twice, Goldfinger doesn’t seem that outlandish a leap into the extravagant. The plot is a fairly straightforward one with a villain with a relatively small plan (no world domination here). The car chase aside, there aren’t any of the outlandish stunts or huge action set pieces that we’ve come to expect from later Bond films.

There is a school of thought amongst fans that it takes three films for an actor to truly become accepted in the role of James Bond (many people believe that Timothy Dalton was one film away from being accepted by the masses in the role) and Connery certainly looks to have relaxed into the part by this film. His Bond is a smug, arrogant bastard who (inexplicably for a spy) likes to be the centre of attention.

This is a man who, upon receiving the assignment to keep an eye of Goldfinger, instantly involves himself in his card game, causing him to lose thousands of dollars. Yes Goldfinger was cheating and deserved to get his comeuppance, but you’d think a secret agent – who doesn’t yet know the full details of his assignment – would be a little more restrained in integrating himself into the man’s business.

It’s a course of action that leads to the death of both Jill Masterson and the inevitable death of her vengeance seeking sister Tilly (the rest of the Masterson family presumably have given Bond a very wide berth ever since). It’s in these characters deaths that Connery’s Bond softens a little and you see the humanity behind the bravado. Connery only has fleeting moments to get this across and he does it with a subtlety and charm that is lost on most actors. 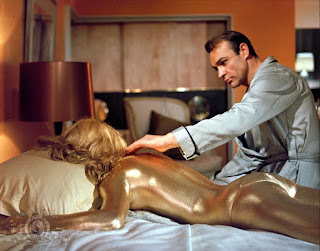 The male attitude of Connery’s Bond towards female characters hasn’t aged well (and neither has his opinion of The Beatles), with the way he forces himself upon Honor Blackman’s Pussy Galore. To be fair though, the treatment of female characters in Bond films (by the character and the films in general) is a huge topic for discussion in another article, but it would be remiss of me not to at least mention it here, given that Goldfinger is one of the worst offenders in the series.

The image of a gold painted Shirley Eaton is arguably the films most iconic moment, living far beyond the few seconds of screen time it has in the film. She is a disposable character who has the good fortune of having one of the series most memorable deaths – even if it does raise the question of whether or not Oddjob painted her after knocking her out (I assume she wouldn’t just lie there to get painted to death) or if they got a professional painter in to do the job. It was probably Goldfinger himself, but the idea of a Sid James-esque painter doing the job has a certain charm.

To be fair, Eaton isn’t the only disposable female character in the film. Tania Mallet’s Tilly is an interesting character who, given a descent arc, could’ve been a great Bond girl. Sadly though, her character is killed off almost as quickly as she is introduced, clearing the way for Blackman’s Pussy Galore.

Blackman left her role as Cathy Gale on The Avengers to play the part of Pussy - in a nice nod to the film, there is a Diana Rigg era episode of The Avengers where John Steed receives a Christmas card from Cathy, leading him to ponder what she could be doing at Fort Knox – and any Avengers fan can certainly see what they saw in her work to get her the part in Goldfinger. Sadly her character is woefully underwritten, with her having a sudden and inexplicable personality shift when she – equally inexplicably – succumbs to Bond’s charms.

This is definitely a villains film, with the double team of Gert Frobe’s Goldfinger and Harold Sakata’s Oddjob providing the series with two of its most memorable villains. There is something about Oddjob that makes him one of the most terrifying villains in the series (second only to Jaws). Sakata plays him almost as if he were a machine, unquestionably doing his masters bidding without question or emotion.

The quirky henchman was just one of the many firsts that the film offered the world, also seeing the debut of the Q Branch Lab, the Aston Martin DB5 and the more outlandish gadgets. Although he first appeared in From Russia With Love, Goldfinger marks the first time that Desmond Llewelyn got to play the character of Q that we grew to know and love over the course of the series. As well as firsts for the series, the film also marked a first for cinema in general, being the first film to feature a laser on screen.

Overall, despite only being the third film in the series, a fresh set of eyes in incoming director Guy Hamilton and co-writer (with series regular Richard Maibaum) Paul Dehn helped to give the film a fresh look and feel that not only prevented the series from feeling prematurely stodgy, but also laid the ground work for the Bond film as we know it today.