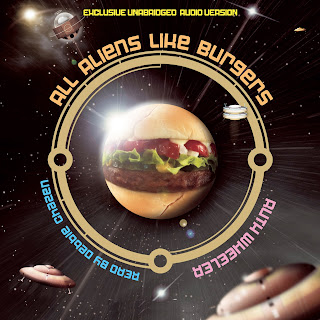 From our friends at Spokenworld Audio, Susan Omand listens to the first recording of the Truxxe Trilogy written by Ruth Wheeler but are we sure All Aliens Like Burgers?...


All Aliens Like Burgers by Ruth Wheeler is the first book in her Truxxe Trilogy. The story starts with a polite teenager, Tom Bowler, who has just left school and is looking for a job to fill his "gap year" before going to university. He applies for a post serving burgers at a "local service station" only to find, at a highly unusual interview, that "local" is a relative term and he is going to be working on Truxxe, a planetoid in the next galaxy over.

The book details his adventures getting to the space service station and getting acclimatised to his new life and working environments. He makes friends and enemies, deals with new customs and methods of communications and gets picked for the work Spottoon team (don't ask). But Truxxe holds many secrets. Gemstones and inept pirates, clicking conspiracy theorists and holographic decoys await before Tom and his new friends unearth the truth about the planet with a soil so richly diverse it can fuel any manner of space-craft. And that's all before the big Spottoon tournament (again... don't ask).

Although this audio book was billed as "An exciting, funny adventure in space, for late teenage - adult readers", I felt like it should be aimed at a significantly younger audience. The style and level of humour really suggested that it was for the early teen market, for whom bodily functions are still enough on their own to be highly funny (ok, since you ask, Spottooning is like darts, only you spit at the board - eugh! - but PLEASE don't ask where the pirates' gemstones came from) and the personal relationship interactions were simple and straightforward, or as straightforward as you can get with a pale lilac alien. As a young teen book it works well, as the story shows the main characters dealing successfully with new life experiences in a practical and matter-of-fact way, meeting new people, being away from home for the first time, bullying etc and I can see it being read as a class book in early secondary school English classes. At that age in school, we were read Paul Zindel books by our English Teacher (who was Canadian and put on "all the voices" when she read to the class) and I was very much reminded of those with this - light and mildly entertaining stuff.

However, if the author was aiming for a wider audience demographic than this, it may not have hit the mark. As a plot it didn't really hold my interest and there was no real empathy for me with any of the characters, although the physical descriptions of both the environments and the characters were good. As a recording, I'm afraid that I also found the narrator's voice and choice of accents for the characters very difficult to follow and this really detracted from the story for me as I was concentrating more on understanding the words than listening to the tale at times, but this is a very personal opinion and others will not have the same issue.

As I said at the start though, this is the first book of a trilogy and it may be that the story builds moreso in the subsequent books. It certainly provides a good grounding as the first of a set of books which I'm sure would be an entertaining gift for a 12 year old's birthday but as a stand alone book for adults, it just wasn't quite my cup of Ruffleberry shake.