Bond, James Bond - For Your Eyes Only 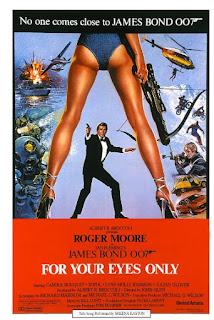 As part of our look back at the films of James Bond, ahead of the SPECTRE release, Barnaby Eaton-Jones remembers For Your Eyes Only...

How do we introduce a new James Bond? I know, let’s return to the Ian Fleming novels and make a gritty return to his literary roots, with less humour and a more ruthless portrayal of 007. Result! Aside from Pierce Brosnan’s ‘Greatest Hits’ album of a film, which seems to think naming the film after Ian Fleming’s GoldenEye house in Jamaica is referencing enough (thank goodness he didn’t live at 89 Bittern Avenue), the template for introducing each successive James Bond is pretty much stripping away everything the audience has come to love about the Bond films. It happens with On Her Majesty’s Secret Service, The Living Daylights and Casino Royale. All are great films and really do have a different ‘feel’ to the rest of the movies, standing alongside Dr. No as a more down-to-earth introduction of our superspy. So, why does this apply to For Your Eyes Only? Well, this film was written specifically to introduce a new actor in the role of our central character. Roger Moore was on a film-by-film contract after The Spy Who Loved Me and, once Moonraker shot him into space, there was nowhere left for him to go and he was also constantly publicly stating that he was too old for the role. So, the producers auditioned various younger Bonds, including Lewis Collins (The Professionals) and Michael Billington (The Spy Who Loved Me) but, in the end, Roger Moore was persuaded to do one last film. This was to be a set precedent for the rest of Moore’s reign and, for all his reluctance, you can only assume that the lure of the fee kept him changing his mind at the last minute and agreeing to return. The pre-credits sequence references 007’s past life, in order to anchor the new man in the role (with Bond laying flowers on the grave of his dead life and being hijacked in a helicopter by Blofeld – who appears without being named or having his face seen. This was due to the legal issues surrounding the character who was introduced in the Bond novel Thunderball, which Ian Fleming published without acknowledging the two other contributors to it). The story that follows is one based on revenge, with a dashing of Cold War profiteering and a low-key twisty-turny plot of deception, deceit and deploy machine in the Greek underworld.

For Your Eyes Only seems to have created a very mixed reaction with the public and the reviewers (at the time of the release and even today). It’s very much a movie Marmite, with people either loving or hating it. Me? I don’t like Marmite but, I have to say, I’d happily close my eyes and take a spoonful of For Your Eyes Only. The very reasons that the naysayers cry against it are the reasons I grudgingly admire it. If all the Roger Moore films were like a set of similar siblings, then For Your Eyes Only would be the one that everyone thought was sired by the Milkman.

Let’s start with Moore. Well, in this film, less is Moore. He dials back his usual jokey persona to produce a performance that showcases him as an actor, rather than a moving mannequin with handsome waxed looks, a permanent arched eyebrow, a tongue surgically attached to his cheek, and a propensity for delivering poor Carry On-type puns with a elegant style that would make Sid James envious. He is rugged, weary, hard-nosed, physically imposing, and playing his age (he turns down the advances of Lily Holly-Johnson’s annoyingly perky real-life American ice-skater – typecast as a perkily annoying American ice-skater – Bibi Dahl). In fact, whenever he breaks out into typical Moore Bond, it seems at odds with the film. This also applies to the terrible scenes at the end with Janet Brown and John Wells impersonating then-Prime Minister Margaret Thatcher and her hen-pecked husband Denis.

John Glen was the editor of previous Bond movies and, like Peter Hunt before him (who was handed the directorial reins in On Her Majesty’s Secret Service), graduates to the Director role. Unfortunately, unlike Hunt, Glen’s direction is workmanlike, rather than inspiring, and perhaps that fits the more serious tone of the film he’s directed. But, he misses a trick by extending sequences which need to be shorter (the ski chase, for example) and cutting short scenes which could do with extension (the ice-hockey players attacking Bond). He also gets no help from the terrible ‘80s music score by Bill Conti, which tries to update John Barry by funking up the soundtrack arrangements with synth brass and keyboard stabs. The phrase ‘funking up the soundtrack’ is one spell-check away from the right description, as it sounded wrong then and it sounds even worse now. The title track, performed by Sheena Easton (who appears in the title sequence too), is a properly 1980s affair and very against the bombastic style of the usual title songs. It doesn’t really seem to fit the film that follows and was to have originally to have been a self-penned number by Blondie, which is equally as poor.

James Bond’s three love interests in For Your Eyes Only are a genuinely different bunch of women. I’ve already mentioned the teenage ice-skating Olympic wannabee, Bibi Dahl, and - aside from her sexually-advanced naughtiness – the other supporting love interest is the Countess Lisl von Schaf, played by Cassandra Harris (at the time, wife of future James Bond Pierce Brosnan), who is the mistress of villain-come-good Milos Columbo. She seems to have the most chemistry with Moore, especially in the exchanges when he finds out she’s faking her Countess title, and her brutal ‘death by beach buggy’ is genuinely shocking and upsetting, however silly that sounds when reading it! The main love interest role goes to French model Carol Bouquet. She plays Melina Havelock and, in possibly the most brutal scene of the Bond movies so far, she is on a boat with her parents (who are recovering the main plot point of the movie – the Automatic Target Attack Communicator (ATAC), a Ministry of Defence device to control the Royal Navy’s nuclear submarines), when they are gunned down by a hitman in a low-flying aircraft.

Her beauty is without question, whereas her acting skills are definitely questionable. She deadpans her way through the film, with Moore acting almost paternally to her (well, maybe more like a naughty Uncle-by-marriage). However, her strong character, with her trusty crossbow at her side, marks her out as more than just a pretty face. Of course, on the other hand, with the death of her parents at the beginning of the narrative that leads her on her course of revenge and into the path of 007, you could say that her closed-off unemotional portrayal is an acting choice of remarkable subtlety and insight of a woman consumed by internalising her grief. You could say that, but you’d be very wrong. She looks fantastic in a wet t-shirt but her performance is more wet fish.

Our villains are a mixed trio too, with Julian Glover showcasing his ability to be smooth, sinister and charming all at the same time (and sporting the essential villain accessory of a perfectly trimmed goatee beard), in the main role of Aristotle Kristatos. His henchman, KGB associate and Olympic athlete Erich Kriegler, played with muscular efficiency by John Wyman, appears to ape the Red Grant template (From Russia With Love) and, whilst his role doesn’t allow for much scope in range, Wyman brings real menace and coldness to the character. Michael Gothard, donning a pair of glasses and smug smile, as hired assassin Emile Leopold Locque, features in the much-discussed scene that surrounds his demise; when he tries to run down Bond in his car, only to find himself shot at through the windscreen and careering off the road to end up rocking precariously on the edge of a cliff. Because he has already killed Bond’s Italian contact, Luigi Ferrara, Bond exacts his revenge by kicking the teetering car over the edge of the cliff. It’s an oft-discussed scene due to it being very Fleming in the portrayal of Bond but very unlike Roger Moore’s version of the character; something that Moore is always keen to point out. However, playing it as scripted (and with real venom when he does it), gives us a definitive take on how Moore could (and perhaps should have) continued to play the role after his semi-serious turn in Live And Let Die introduced us to him.

The one stand-out character in the film, who perhaps seems slightly like he should have been in a livelier Moore escapade, is Topol as Milos Columbo, a supposed villain who actually turns out to be Bond’s ally. Topol is best-known for his role in Fiddler On The Roof and Flash Gordon, but his slightly over-the-top characterisations of these previous films are pulled back here to reveal a good actor in a seriously humorous role. The twinkle in his eye and his desire for jollity over dishonesty is a welcome spark in an otherwise dour film. Fortunately, he eschewed the glass eye, raincoat and catchphrase of “And just one more thing…” as essayed by Peter Falk. No, hang on, that’s a different Columbo, isn’t it?

The ending is unusually downbeat, for a 007 movie, in that nobody really wins. Bond throws the MacGuffin Machine (sorry, ATAC) away, which everyone was chasing, and it smashes to pieces on the cliff they have just scaled to get to the villain’s lair; neither the Russians or the British get back what they’ve been secretly fighting over.

So, For Your Eyes Only might be uneven and, at times, unappealing to watch, but it gains kudos for being a tightly-plotted tale of revenge, with some realistic emotions, violence and repercussions that grounds 007 in espionage rather than pure fantasy. It stands out for daring to be different, even if that means excluding some of the excitement and spectacle that the public had come to expect from the franchise.