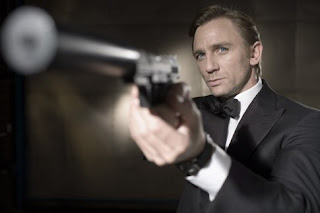 Susan Omand spends quite a long time staring at photos of Daniel Craig, and others, to see how they compare to the literary James Bond...

Six actors, but I guess quite a few more if you count the travesties that were early TV and film adaptations of Casino Royale, have introduced themselves on-screen as James Bond. I won’t ask you who your favourite screen Bond is because we all know the answer is Timothy Dalton so there is no argument there, but how close do each of the actors come to being the "real" Bond – the James Bond that was described in the books by original author Ian Fleming?

So what do we know of the literary Bond? James Bond in the books may not actually be Scottish (shock horror) and, although it is never mentioned in the Fleming novels, in Charlie Higson’s Young Bond books he is said to have been born in Zurich. What we do know is that his father WAS Scottish, Andrew Bond of Glencoe – yes, where Skyfall Lodge is - and his mother, Monique Delacroix, was Swiss, explaining Bond’s affinity with languages as they split their time between Chelsea and Basle. James Bond was orphaned aged 11 when his parents died in a climbing accident in France and he was sent to live with a maiden aunt in Kent before being hived off to boarding schools, first at Eton, then at Fettes College in Edinburgh (where, coincidentally, Sean Connery really WAS their milkman) before joining the Admiralty and progressing through Naval Intelligence before being picked up by MI6 and given the 00 prefix. So much for the potted history, what did he actually look like?

In fact, there is a fantastic description of Bond as an adult in From Russia With Love that describes him as follows:

In other books he is likened to the singer Hoagy Carmichael except with a "cruel mouth" and a "coldness in the eyes". So how do the film incarnations, literally, measure up?

All except Daniel Craig are around the right height – Mr Craig being a shortarse at only 5’10”, so he’s out. Weight for weight they were all there or thereabouts at the time of their first films, with Pierce Brosnan being noted as being both the lightest and heaviest of the Bonds, depending on the film, so I guess he can be ruled out.

Hair colour – with the blond bombshell Craig already out due to coming up short, the only hair problem, other than Mr Connery’s toupe, is that Roger Moore had brown hair not black. So he’s out.

Eye colour – Timothy Dalton has green eyes and George Lazenby’s are brown as are Sean Connery’s.

So, since we (cunningly) managed to ditch the blue eyed Pierce Brosnan and Daniel Craig in earlier rounds, and nobody has the noticeable scars, it seems that nobody physically measures up to the Bond in the book (although Timothy Dalton comes closest – because I said so.)