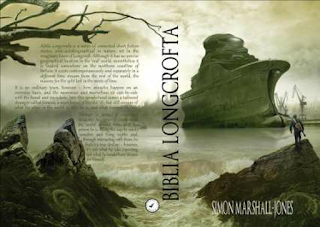 Have you ever wondered whether there are dimensions and other realities which are no more than mere seconds away from the present? Simon Marshall-Jones’s debut short story collection posits just that possibility, with a series of interconnected and semi-autobiographical tales based in the fictional otherwhere of Longcroft, a town whose existence belongs to the parallel universe just a millisecond beside you. It’s a place where the marvellous is commonplace, where myths and legends walk abroad, and where statues come to vivid life. But it also harbours many secrets, secrets which can shatter worlds, but also ones which delight. Come and join Simeon as he navigates the wonders of Longcroft.

Longcroft as a place reminds me a lot of Eureka from the TV series, in that it’s a normal small town with unusual, to outsiders, things going on that do not phase the locals in the slightest. From a statue that comes to life, to a convention of forgotten gods buying icecream on the seafront to the dead demanding council representation on an annual basis, it’s all perfectly normal. And it’s this normalcy that makes this collection a very “comfortable” read. The writing in the first three Longcroft stories is light, fun and matter of fact and the descriptions of both people and places are vivid and beautiful, making it very easy to become totally immersed in a whole new world, aided by the use of the first person narrative throughout as we experience the world through the eyes of Simeon, the main character. In fact, the writing style and the humour in the stories in the early part of the book reminded me very much of Douglas Adams at his best. I can just see this as being a rainy Sunday afternoon escape into a world just slightly out of step with our own and I could quite happily read whole books of these collected fun anecdotal stories about the place without there needing to be a connecting thread other than the location and the people. However, once Sophie is introduced as a character, a longer story arc develops and you can see how the first few stories fit together with the rest moreso. The tone changes somewhat too as it feels more serious but this does not detract from it at all, in fact it makes it less of a “dip in and out” book than I was expecting and more of a “sit down and read”. And the epilogue puts such a twist on the story that I’m looking forward to seeing how it will untangle itself, if it does, in future books. Longcroft is a fantasy place, yes, but the comfortable writing style and the vivid description make it highly accessible.

As well as the Longcroft stories, there are two bonus stories after the epilogue and these should not be missed out, however incongruous they may feel to the Longcroft tales.

The first of these stories is Feathers, best described as a story of love discovered and lost again. In stark contrast to the Longcroft stories, this is very much the here and now as our protagonist Warren, again written in the first person, discovers more than just an escape from the city after reconnecting with an old friend and moving north. The description in this story is rich and deliciously evocative – like describing a fire as “sinuous, rhythmic hip swaying, belly-dancing flames” – so much so that the story itself is almost secondary to it, you just luxuriate in the imagery and the tumult of emotion, until close to the end of the story when the narrative kicks in from a third person viewpoint and the loose ends are tied together. This is a pity really as I would have loved more of the mystery to have remained for the story without feeling the need to tidy it up.

The second of these bonus tales is called Leaves and is a wonderful piece of writing. Those of you who know me know that I’m a sucker for a good traditional Celtic folk tale and that’s what this is. Indeed, if it weren’t for the 2 mentions of technology and mobile phone masts, it could have been set at any time. Yes, again, the plot progression was a bit obvious once you got to a certain point in the story, but that really didn’t matter as the descriptions of Auntie, Donal and the locations, which very much felt like the west or north coast of Scotland, were beautiful and the story itself had a real magical quality about it. I will admit to feeling a tear in my eye at the end of it too. Nostalgia? Maybe. But I defy you not to think back to bedtime stories when you read it.

As a debut collection, this is a very VERY strong start from Mr Marshall-Jones and I hope we’re going to hear a lot more from him and Longcroft soon.