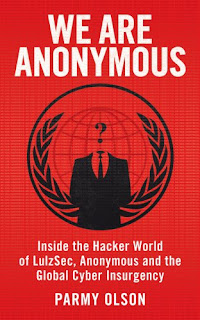 Twenty years ago in the United States our favourite film and inspiration for our site design and name was released. To celebrate Hackers we are looking at all our hacking related articles. Steve Taylor-Bryant reads We Are Anonymous by Parmy Olsen…

The latter part of the last decade saw in reality something only spoken of in books and films before. Masked vigilantes with a peaceful purpose confusing the world and bringing attention to a cause. Or did they?

The first Anonymous march was on the headquarters of Scientology, people gathered in their masses wearing V for Vendetta masks and stated their case against Scientology’s methods with placards and songs. This, however, was not a one off but the start of something that the internet built, a group that would become Anonymous, started on the message boards of the likes of the fast and free 4chan. What started as memes and pranks for some became an online movement. Thousands started hacks and attacks on websites to save the likes of Pirate Bay and WikiLeaks with ‘How To Join The Hive’ DDoS attacks to shut down Visa, MasterCard and PayPal who had all abandoned the sites, effectively cutting of their funding, seemingly co-ordinated by a core group of leaders in Topiary, a charismatic public relations teenager, Kayla, who was a database hacker, and Sabu who seemed to be the politically motivated one who, if this was a cult, would be the enigmatic leader. However all was not as it seemed. The organisation that the outside world saw wasn’t always in place and, whilst the website and email hack of HBGary seemed to go off without a hitch, other hacks saw those wanting to be involved but without the technical expertise to hide themselves arrested. Casualties of the cause or innocents corrupted and hung out to dry?

The original group from Anonymous were joined by others, Laurelai, who was part of the Scientology march, Jennifer Emick, who would eventually go against them, and William from the 4chan chats who was the joker of the group but an essential part of the Sony hacks, to form LulzSec and this is where Parmy Olsen’s book takes off. This is a story of hacking and freedom yes, but more essentially it is a human tale, a look at what happens to singular people within a crowd and how having multiple aims can sometimes dilute a message. Don’t get me wrong, this group of hackers were the most wanted cyber terrorists in history. They hacked the C.I.A and the United Kingdom’s Serious Organised Crime Agency. They embarrassed Rupert Murdoch, by changing his own front page in his Sun daily newspaper claiming he had died, and PBS, when they were less than flattering about WikiLeaks, awoke to find they had run a story about Tupac Shakur being alive and well and living in New Zealand, and they brought Sony to its knees, a hack that continued for years and pretty much crippled Sony’s online systems.

When the F.B.I finally managed to make inroads into the group, Sabu was arrested and turned informant which led to the downfall of the main protagonists. Topiary (Jake Davis from the Shetland Isles), Ryan Cleary from Essex and an autism sufferer, Ryan Ackroyd, who was a serving soldier pretending to be a 16 year old girl as Kayla, and T-Flow who really was 16 at the time and named Mustafa Al-Bassam, were all tried and convicted in the United Kingdom. They suffered less than their U.S cousins though, as they are all out now having served their time but in the United States hacking is a more serious crime and the likes of Jeremy Hammond who hacked Stratfor and supporting journalist Barrett Brown are facing multi-million pound fines and decades behind bars.

The level of access Parmy Olsen had to the group is unrivalled in journalism and makes the book even more fascinating. The technical attacks read like a film, but it is the human connections that fascinate. Whether there is a leader or not doesn’t seem to matter, as Anonymous continues to get involved in the world, taking to task those that need it, punishing those deemed deserving, but also with a more social responsibility now, the Operation Safe Winter and Occupy movements all stemming from their keyboards.

Whether they meant to be serious or it really was for the Lulz when it started, We Are Anonymous introduces us to a new kind of hero. Those with the power to change the world from their bedroom.