Film - The Imaginarium of Doctor Parnassus 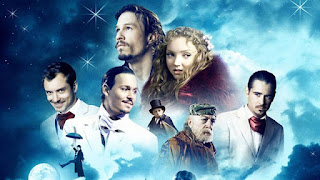 Do you dream? Or should I say... can you put a price on your dreams? Or... the dreams of the less fortunate in this world? Steve Taylor-Bryant enters The Imaginarium of Doctor Parnassus...

Geographically speaking, in the Northern Hemisphere. Socially, on the margins. And narratively, with some way to go.

The multi layers of what the Imaginarium can produce seem to be a Gilliam swipe at the world. Those who demand instant gratification are often deluded and punished by what they want, as are the film going audience that demand action at every turn and then complain when Hollywood is all about the next Michael Bay project, but those with belief and patience are rewarded with something beautiful, something rewarding and, sometimes, something tinged with genius, which sums up The Imaginarium of Doctor Parnassus perfectly. In the plot of Imaginarium you get a fantastical take on the old adage of making a deal with the devil and, if you watch closely, what you are actually getting is Terry Gilliam's life story played out on screen. A man who knows what he wants more than anything, who has a genuine love alongside his more way out aspirations, who has to deal with the evil of a higher power to often achieve his goals.

Doctor Parnassus (Christopher Plummer) is a mystical man, over a thousand years old, who travels around in his Imaginarium, an old sideshow theatre from yesteryear, with his daughter Valentina (Lily Cole), his assistant Anton (Andrew Garfield) and his short confidant Percy (Verne Troyer). Together they offer their audience a ride into their dreams through the mirror. At Blackfriars Bridge they find a man hanging and rescue him. The man, Tony (Heath Ledger) purports to have no memory of who he is and so joins the troupe, helping them gain more financial reward. Parnassus, though, has made a deal with Mr. Nick The Devil (Tom Waites) which promises Nick that he shall have Valentina on her 16th birthday in exchange for his immortality. Not wanting to lose his beloved girl, Parnassus strikes another bargain with Mr. Nick - his daughter in exchange for five souls through his Imaginarium. Who is the strange Tony? Will Parnassus beat Mr. Nick? Are your dreams really want you want? Enter The Imaginarium of Doctor Parnassus and find out. 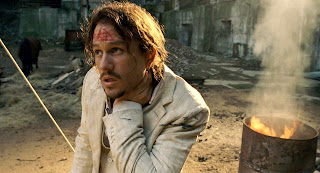 One thing that Terry Gilliam does so well is bring an almost dark childlike fantasy to the screen. Throughout his career we have become accustomed to his wide angle lens view of his imagination and his animation and puppetry have always pleased right from Monty Python through to the present day. One aspect of film making that Gilliam didn't really use very much though was CGI which he more than makes up for in this film. The Tonys Imaginarium scenes are astonishing. From serpent rivers to sky high ladders, from a lake of vodka bottles to a world literally crumbling around you, Gilliam, ever the fantastical show off, throws many ideas at the screen but instead of a jumbled mess the viewer is rewarded with stylish, elegant almost, interpretations of a person’s dreams. His setting works really well with the centuries old looking horse drawn theatre playing off the modern dingy looking London like it was meant to be there. Oscar nods came for Costume Design and Art Direction and you can tell in every scene that the recognition was truly deserved. I'd have added a few more Oscar nods myself but I'm not in the Academy. In the use of dark moments, of poverty stricken and run down locations and the depressing despair that hangs over Parnassus being over shone by the Imaginarium scenes in their brightly lit splendour, you get a tale of two halves that knit well together in only a way Gilliam could accomplish. 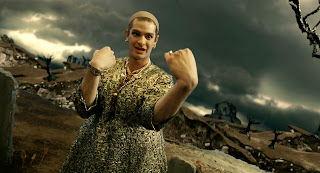 Gilliam's other power, the one that doesn't involve extraordinary visuals, is in his casting. With the exception of one actor who shall remain nameless (Matt Damon in The Brothers Grimm) every piece of casting in every film has been just what that particular project needed at that time and, whilst most people's attention was nudged towards Heath Ledger, the 'other' cast members in Imaganarium need writing about too and, if I'm honest, one of them even steals the film from Ledger and that star is the wonderful Andrew Garfield. I've long been an admirer of Garfield, Lion for Lambs saw him share the screen with Robert Redford and not seem overawed or out of place, and whilst the Spider-Man gig was fine I find when he gets a bizarre script he really comes out of himself. As Anton in Imaginarium, Garfield plays a young man who annoys me. Whiny, pouty, sulking, somewhat a brat almost, who has his nose put out of joint after the arrival of Tony and it’s to Garfield's credit that sometimes I almost boo him out loud when I watch the film. By embodying the character so very well, he draws emotions out of me, the viewer, more than any other cast member, more so today now I can view the film without the added emotional baggage of Ledger's untimely death hanging over me. From the real world strops that so get to me, I find myself rooting for him and laughing both with and at him within the Imaginarium, and his final confession of love for Valentina before he plummets into the abyss still chokes me.

Christopher Plummer as Parnassus is sublime, whether coherent or not, and Lily Cole has a quirky edge to her performance that makes her incredibly watchable. A lot of research would explain that Mr. Nick as the devil is based on older stories and films but for me he was wearing the suit as he is the living embodiment of a studio executive sent to torment the innocent man who just wanted to do well. Therefore, Tom Waits as Mr Nick, the devil, is perfect and the Imaginarium Tonys of Johnny Depp and Jude Law are brilliant but, of the three stand ins, Colin Farrell pinches the role and is the only one who plays it as a non-Ledger tribute which I found refreshing. 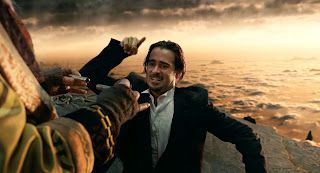 One of the lines in this film that chilled me right to the bone is 'Nothing is permanent, not even death' spoken by the much missed Heath Ledger as Tony. Not because Ledger had passed on to his own Imaginarium by the time the film was completed, although whenever a deceased star talks about death in their final film it is chilling for the fan, it was because death didn't stop anything in this film. Ledger's passing didn't put the film in Don Quixote hell, three actors and a rewrite of certain scenes kept the film alive. Farrell, Law and Depp, himself part of the Quixote shambles, stepped in as 'Imaginarium Tony' for the dream sequences. All three actors signed on on the proviso that there acting fee went to Ledger's daughter and when Gilliam wanted one of Tony's taken out as it was the last words uttered by Ledger on camera he asked Depp to improvise a scene in which Depp came up with the same line Ledger himself had improvised leading Gilliam to remark "Heath is still out there. Johnny's channelling Heath somehow. I mean, Shirley MacLaine would love all this."

Nothing is permanent indeed not even death.