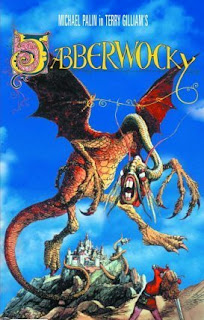 Terry Gilliam goes all Lewis Carroll? How much madder can it get? That was the first thought before Susan Omand sat down to watch Jabberwocky and waited to find out...


’Twas brillig, and the slithy toves
Did gyre and gimble in the wabe:
All mimsy were the borogoves,
And the mome raths outgrabe.

The film opens with the start of the poem along with a poacher who is trapping animals in the forest. However, to the accompaniment on Jaws-like music, something follows him through the trees and attacks, leaving him as nothing but a steaming skeleton. A monologue explains that it is the middle ages and a monster, dubbed the Jabberwocky, is terrorising the area. However there are still a few places where rural life continues and this is where we find Dennis Cooper, son of the ...er... Cooper (or barrel-maker) taking inventory and talking to a fish merchant, who tells him of this monster that is rampaging through the country. Dennis goes to visit his “girlfriend” Grizelda, the merchant’s daughter, but returns to find that his father has taken a bad turn and is on his deathbed. Renounced by his dying father as a “stock-taker,” Dennis to the city to seek his fortune.

In the mediaeval city, merchants discuss business as they travel to a council with the King, Bruno the Questionable, to discuss the effect the monster is having on the city. The peasants of the city also beseech the King to do something. The king and the chamberlain discuss it and decide that they need to hold a tournament to choose a champion to fight the monster. Meanwhile Dennis has arrived at the city gates but is refused entry. The king tells the princess about the tournament and that she will marry the champion. A storm hits as night falls and the monster is heard as Dennis huddles by the city wall, wet and starving. He asks for soup and is told to collect firewood from the forest. The monster, and Jaws music, follows him through the forest and Dennis is actually saved as it eats a man who is about to beat Dennis up. Next morning, Dennis discovers a way into the city through a side door and hears about the tournament so goes along to watch. In the crowd Dennis chases a dropped turnip, hungry for food, and ends up carrying armour into the repair shop after a bit of a collision with a knight’s squire. Dennis tries to help by trying to improve the efficiency of the workers but causes chaos, much to the amusement of the squire, who invites him for a meal at a local inn. Dennis asks if he can work for the innkeeper but the innkeeper is more interested in the whereabouts of his wife and the squire, leading to Dennis being thrown out. The street fight is broken up by the same guards that refused Dennis entry to the city and he is taken the dungeon. 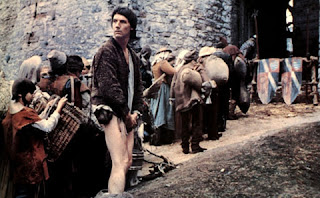 The merchants, meanwhile, are petitioning the king NOT to destroy the monster as it would be bad for the city’s economy. The church too asks for the monster not to be killed as congregations have increased as people pray for salvation. The debate is disrupted by the racket of Dennis and the innkeeper heading to the dungeon. Another fight ensues and Dennis escapes only to be trapped in the tower where he meets the Princess, who believes him to be a prince. The princess concocts a plan to help Dennis escape the castle so, dressed as a nun and with night falling, he heads for the city gates. However, he runs across a religious sect who believes him to be a devil and offers him as a sacrifice to the Jabberwocky. He is set to be catapulted over the wall but the disciples of the sect argue that it’s not fair that this “devil” should get all the glory and Dennis escapes again.

Next morning and the tournament continues. The princess is still mooning over her “prince” and watches as knight after knight falls against the lance of one particularly evil looking rider, the Black Knight. Dennis meantime has found the squire again while the remaining knights resort to playing hide and seek to choose a winner. A champion is chosen, although he is still hidden, and it’s the squire’s boss. The squire talks Dennis into standing in for him at the knight’s vigil and Dennis ends up riding through the streets behind the champion where they are told by the king that they must slay the monster. The gates are opened and the champion and his “squire” head out, to the words of the Jabberwocky poem. Screams are heard and they head towards the noise, where Dennis finds Grizelda and her family have been captured by bandits. The knight falls off his horse onto the ringleader, accidentally and kills him and Dennis rescues the family, although Grizelda has now fallen in love with the knight. Dennis is chased off by the family as the knight rides off into the sunset. 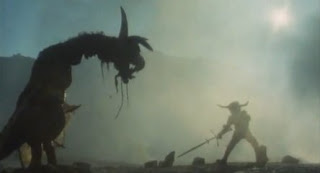 Back in the city, the merchants are discussing how to get rid of the champion and save the monster. They recruit the Black Knight from the Joust. Meanwhile the champion and the squire wander through desolate villages, strewn with bodies, in search of the monster. Instead they encounter the Black Knight and a final battle to the death. The Champion defeated, it is up to Dennis, surrounded by the Black Knight’s gang, to try and save himself. The Black Knight falls from his horse and Dennis uses the chance to arm himself and run. However, he is cornered and they fight until, suddenly, the Jabberwocky appears before them. The Black Knight and the Jabberwocky fight, the Black Knight is killed and the Jabberwocky heads for Dennis who manages to accidentally kill it. He takes the monster’s head back to the city and is lauded by the crowds, although not by the merchants. The King arrives and commands that Dennis takes half the kingdom and marries the princess, even though he now has the chance to finally marry Grizelda. Dennis and the princess are wed, much to his dismay, and they ride off into the sunset.

More linear than a lot of Gilliam’s films, Dennis’ adventures felt very closely related to the other Python films, especially Holy Grail, although Gilliam threatened legal action on anyone who dared bill it as such. The comedy was very Pythonesque, visual, slapstick and often childishly crude, and all it was really missing was the knights not actually saying Ni at any point. There were also parts of the film that I could really see as one of Gilliam’s trademark cut-out animations, especially those involving the shambling king. However, it also suffered with being a bit too long and drawn out to be the laugh a minute comedy it could be, although I must admit I find a lot of Monty Python similarly variable. That said though, the cast reads like a who’s who of 1970’s British comedy. Michael Palin plays his “Python naivety” best as Dennis Cooper and, as well as some of the Pythons, although John Cleese is noticeably missing, we have appearances from the likes of John le Mesurier, Harry H Corbett, Rodney Bewes, Max Wall, Bernard Bresslaw and Warren Mitchell amongst many other recognisable faces. If you look very very carefully you may even spot Darth Vader himself, David Prowse.

Beware the Jabberwock indeed – if you love the humour of Monty Python, you will enjoy it.