Book - Time Travelling with a Hamster 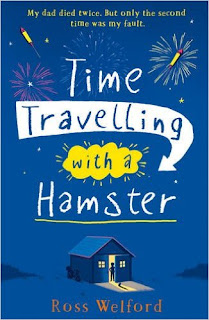 Susan Omand heads back to her youth, kind of, as she reads Time Travelling with a Hamster by Ross Welford...

There are three things that first attracted me to this book:

1) The title – I mean who WOULDN’T want to know about time travelling? And with a HAMSTER! So I read the synopsis.

3) The name of the hamster. Never mind your Hammys or your Fluffys, this hamster’s name is... Alan Shearer. Hahahaha OK, sold.

Actually there is a fourth thing that made me really love this book but I didn’t discover that until I started reading. Al, a twelve year old boy and the main character in the book who tells the story from his own point of view, loves giving facts by way of writing lists. Like me.

Al, or Albert Einstein Hawking Chaudhury to give him his full name, has a bit of a problem. On his 12th birthday he was given a hamster, which his football mad step dad called Alan Shearer. Al also got a letter. This was from his real Dad, a maths and science genius who had died 4 years before. It wasn’t your usual letter though. Instead of giving Al advice on growing up or giving the “birds and the bees” talk, the letter explains that his Dad knows the reason for his own death and gives Al instructions on how he can prevent it... by travelling back in time to 1984 using the time machine his Dad had built in a hidden bunker under their garage. And this is where Al’s problem kicks in. His Mum had married again in the four years since his Dad’s death and they had moved house to stay with his new step dad and his “step sister from hell” Carly. This meant that the time machine that he needed to use to save his dad was now in a hidden bunker under someone else’s garage several miles away from where he currently lived. Al has to work out a) if the story in the letter is true b) whether the time machine, if it exists, actually works and c) what the hell he was going to do about it. (Oops, unintentional list there.)

The characters are incredibly well written and very believable. The “voice” of twelve year old Al is just perfect as he thinks and talks how any kid would. The story itself is very engaging, with plenty excitement as you would expect from a time travel story, some scary bits, some sad bits and lots of humour. It is also really impressive that the complexities of time travel theory and the confusion of parallel timelines are explained in a way that is really straightforward without feeling like it had been “dumbed down” and over simplified. It’s just exactly as a 12 year old would understand it.

This book is marketed as a book for children but please don’t let that stop you reading it. The chapters are short, which was great for me as I never have huge blocks of time at once to devote to reading so could read a chapter in a few minutes and not feel like the story was spoiled in any way by being broken up. I can guarantee too that this is a book that I will read again, even though I now know the ending, just to re-experience the maths and computer programming from my youth.