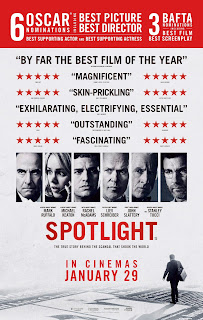 Based on real events, Chris Smith turns the spotlight on the Oscar nominated Spotlight, out on DVD this week...

In early 2002, when The Boston Globe ran its first story about child molestation committed by the city's Roman Catholic priests, few had any idea how far it would reach. Conducted by the Globe's Spotlight investigative team, the article detailed how the abuse inflicted by nearly 100 priests was not only known to church authorities but had been systematically concealed by them. The victims and their families were denied justice and the priests were moved out of the parish - only to harm innocent children in another.

Spotlight tells the story of reporters Michael Rezendea (Mark Ruffalo), Walter Robinson (Michael Keaton), Sacha Pfeiffer (Rachel McAdams) and Matt Caroll (Brian d'Arcy James) who, at the insistence of new editor Marty Baron (Liev Schreiber) begin to re-examine the case of convicted paedophile, Father Geoghan. Baron already believes that senior figures within the church had to have known about Geoghan. As the team explores leads and speaks to abuse survivors, it's crystal clear that these sickening crimes are not limited to a few individuals. The abuse is endemic and the numbers of victims may run into the thousands.

However, the Globe is a newspaper with a high Catholic readership. Editor Ben Beadle Jr (John Slattery) and several other reporters at the Globe have reservations about the victims' claims. Stories about the case have been run before and Beadle sees little benefit in revisiting the issue. When the team sue the church to gain access to very sensitive and possibly incriminating files, everyone involved will have to face some very unpleasant - and very personal - truths.

For a film about the exposure of child abuse by some of society's most revered figures of authority, Spotlight is oddly dispassionate. Like the real persons it depicts, the film follows the story with methodic objectivity. There is no grandstanding and few heartfelt pleas - just a group of professionals on the cusp of something earthshaking. When members of the team do let their emotions come to the fore, it's a sobering reminder of the humanity on both sides of the news desk.

Every one attached to this story has an agenda, from the head of a survivors' group, desperate to be listened to, the diocese of Boston and persons attached to the church, to those at the Globe who have suspicions the allegations. As members of a strongly Catholic community, the Spotlight team are having to come to terms with their own roles in the cover-up. This is not the first time allegations of a conspiracy have surfaced and the Globe was in receipt of evidence several years previously. True, they are nowhere as complicit as others but a culture of silence has to be created in order for the abuse to take place. Where does responsibility end?

In terms of acting, Spotlight is near-perfect but Stanley Tucci's portrayal of bitter-but-committed lawyer, Mitchell Garabedian deserves a special mention. He's already tried to uncover the truth before but didn't get far and his role in the film is as a jaded counter-perspective to the resources and enthusiasm of the Spotlight team. Jamie Sheridan and Billy Crudup play Jim Sullivan and Eric MacLeish respectively, two attorneys who have previous involvement with these cases - one acting for the church and one for their victims. The portrayal of these two men flit between having a role to play in protecting the priests and being integral to revealing the truth. Usually in films like these, members of the legal professional are held as either little better than the criminals they represent or tireless, noble crusaders. Here they are neither and their characters are more complex for it.

At 129 minutes, Spotlight never feels too long as attention remains firmly absorbed by what's happening and what's being said. For those concerned that this means over two hours of harrowing descriptions of child abuse, you will be spared the worst of it but not completely. Spotlight avoids the most heinous but doesn't shy away from being honest. We are talking about one of the worst crimes human beings can inflict upon each other and the reality of that needs to be known. Treatment of the victims is sensitive but it's clear that great efforts have gone into not talking about how society treats these crime - and the victim-blaming and slurs that prevent so many people from coming forward. This is both understandable in the sense of keeping the focus on the investigation but frustrating as it means losing an opportunity to speak frankly about the reality of how sexual assaults are treated.

Nevertheless, Spotlight is a captivating, powerful and engrossing story of one of the most disturbing journalistic investigations in recent history.