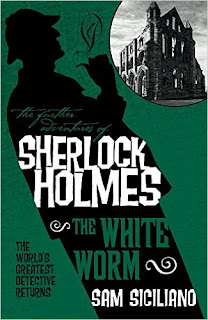 Sherlock Holmes and his cousin, Dr Henry Vernier, travel to Whitby, to investigate a curious case on behalf of a client. He has fallen in love, but a mysterious letter has warned him of the dangers of such a romance. The object of his affection is said to be under a thousand-year-old druidic curse, doomed to take the form of a gigantic snake. Locals speak of a green glow in the woods at night, and a white apparition amongst the trees. Is there sorcery at work, or is a human hand behind the terrors of Diana’s Grove?

Well this is strange territory for me. There is a Sherlock Holmes book released from Titan that I didn't enjoy. I've loved the various re-imaginings of Holmes that Titan have released over the years. George Mann is exceptional in his storytelling, Mycroft Holmes by Kareem Abdul- Jabbar and Anna Waterhouse was brilliant, and Vaughan Entwhistle is a favourite of mine. Sam Siciliano though has managed to bore me. Watson is replaced for some unknown reason (if there is a reason, it isn't clear) by Dr. Henry Vernier who spends the entire book annoying me by being a bit whiny and not actually doing much to add or drive the narrative and, in trying to include Bram Stoker's The Lair of the White Worm into the story, Siciliano hasn't created a literary masterpiece based on a literary masterpiece. Instead what has happened is I now have the Hugh Grant film stuck in my head.

I just didn't get what the author was trying to do, I didn't buy into the characters at all which meant if there is a gem in the plot then I've missed it. It's a real shame but I'm giving Titan a pass on this as they very rarely let me down. Sherlock Holmes and the White Worm is at best average fan fiction and not a title I expect from my favourite publishing house. Maybe I'm wrong? You can try it yourselves from February 12th.