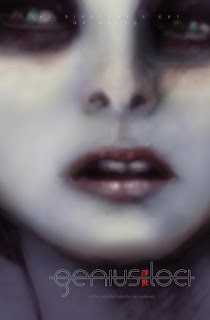 Susan Omand gets caught up in a bizarre new world as she discovers the graphic novel UKIYO/genius loci and talks to its creator Cary Polkovitz...

Last week a tweet pinged across the /G-f Twitter timeline urging us to have a look at a Kickstarter. I don’t know what made me open the link, to be honest I usually don’t but, boy, am I glad I did this time as a whole cyberpunk world exploded in front of me.

Two things immediately caught my eye and piqued my interest – the utterly stunning artwork and the headline description “One part Ghost in the Shell, one part Fear and Loathing in Las Vegas.” Wow, ok, them’s big claims, but it made me read on to see how true they were.

Cary Polkovitz is crowdfunding a 12 issue graphic novel based around this universe he has created, which he describes on the crowdfunding page as “Part cyberpunk, part hard-boiled detective story, and part existential treatise.” The graphic novel focuses around the experiences of Donovan Vaux and the un-named characters of The Girl, The Inspector and The Soldier as they try to find the answers to who they are in a world filled with drug-use, war, corporate greed and identity crisis. The novel is planned as an expansion of, and a companion to, the existing webcomic and website whoisthegirl.info, which itself brings expanded content such as music, blogs and videos as well as the regular webcomic to round out the world of The Girl. 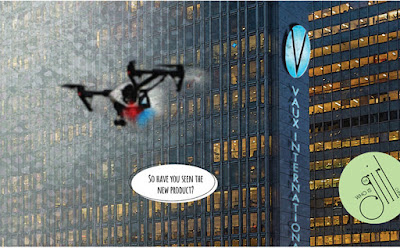 I’ll admit it, after reading that single page on Kickstarter and a quick look at the website, then completely losing an hour just reading the webcomic pages, I was completely hooked. So I got in touch with the creator Cary Polkovitz to find out more. Here is our interview:


Thanks for taking the time to talk to us Cary. Your Kickstarter says that this has been a project twenty years in the making. Where did the idea of UKIYO originally come from?

Well, back when I was in college my friend C. Brent Fergusen and I put out an independent comic book called “Nau Headhunter.” It was a three-issue cyberpunk story that did surprisingly well. I always had a soft spot for the main characters and have been toying with brining them back in a more…mature way. I was young and inexperienced in life and felt that I needed to see more before I was able to write a good enough and complex enough story for the characters. So, twenty years later, here we are.

What made you decide to branch out into an issue based format with the graphic novel?

To be honest, it was a financial decision. Aside from the fact that the book would be somewhere along the lines of 500 plus pages, doing small print runs of individual 60-70 pages comics allowed me to find printers that would produce books on higher quality paper which, due to the complexity of the art, it really does need.

The art on both the Kickstarter page and on your website is amazing. Which comes first for you when writing, the imagery, the characters or the plot?

Thank you so much! I really do appreciate the kind words. As far as which is the chicken and which is the egg, I think the characters tend to come first. At least their appearance does. I have always been an extraordinarily visual person so I imagine the look of the characters and then let them tell the story. I will have a few trials and tribulations that I have in mind to put them through, of course, but the characters themselves have a tendency to tell me what they want to do as the story progresses. Which I do appreciate as I would be lost without their input.

Your website has so much more than the story/books on it, why did you decide to expand on the idea in this way and do your find the story influences the music choice or the other way around? What kind of music do you normally listen to while writing?

I felt that if one got to know the characters (especially The Girl) in ways that the original story doesn’t allow, it might give the character more depth and let the reader in to her world a little more. It also allows me to stay with the characters a bit longer and play in their world some more. As far as my music choices, I have a tendency to listen to trance, electronica and movie soundtracks while I write. Most of it is pretty dark and heavy but it does allow me to get into the mindset of the world I am trying to create. 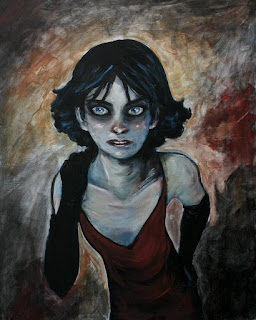 Talking of influences, where did your love of the genre start and what do you find yourself reading now? Do you stick to reading things similar to your own writing or actively avoid it?

Oh boy…where do I start? For comics, I began my love of those with two giant volumes of old Batman and Superman comics that my parents gave to myself and my brother. Between the wonderful and imaginative stories and the exciting artwork, I was inspired to draw and play make-believe as a child. Later on other influences came along: science fiction books and movies (Star Wars, Star Trek, Blade Runner) and later still, existentialism and more experimental works of fiction and film (French existentialist films, the works of Kafka, Sartre and Camus, Bruce Sterling, Richard Calder, Jeff Noon and, of course, William Gibson). As far as my current reading lists, I am all over the map. I read Murakami, Eggars, Palahniuk, Milhuaser, and then there is the constant influence of brilliant sequential storytellers in both film and comics (Noe, Malick, Von Trier, Jeunet, Aronofsky, Hanuka, Moore, Remender).

What’s next for The Girl and for Cary Polkovitz?

Well, I am still having an awful lot of fun with the webcomic over at whoisthegirl.info so I think that will keep going for a little while longer, at least. Maybe a film someday? That would really be something wouldn’t it?

Finally, a chance to promote the Kickstarter – why should people invest in you?

I’m a really nice fellow and cute as a button. No, seriously, I think that UKIYO/genius loci is a unique property with so much potential. The funding of this project is, hopefully, the beginning of a long life for The Girl and the world she exists in. The comic itself is, I think, worth taking a look at, and the possibilities are endless, but only if we can get this thing off of the ground and into the eyes of the readership. For a writer I think that is the biggest thing: getting the story out there and into as many hands as possible so that maybe it will inspire or, at the very least, intrigue.

With perks such as stickers, pill shaped flash drives and a painted skate deck as well as the graphic novel issues themselves, you can support Cary's Kickstarter HERE and find out more about The Girl on the website.