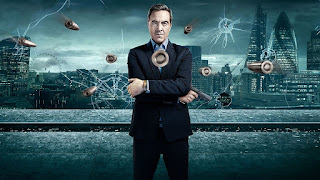 I'm definitely in love with the theme tune!

Luck comes into play right at the beginning with chefs throwing a blazing pot over the side of a ship distracting the evil bald man before he could hack off Harry's arm with a machete, allowing Harry himself to use the weapon to free his ankles from the ropes holding under the Thames. The rest of the episode sort of followed quite quickly and wrapped me in the tale and quite honestly I was gutted when it was over. Luck definitely follows Harry now and, as he was trying to come to grips with it, he was really testing how lucky he was. Swapping betting slips at the dog races sees the race abandoned as luck couldn't give him the result he first picked. Deciding not to catch a train and instead follow a hunch to catch Grey at the funeral of his dancer girlfriend led to running across a busy motorway without being hit, managing to arrest Grey, and then finding out the train he was due to be on was involved in a massive derailment that left many badly injured. He received another warning about not wasting the luck by the woman who chose him to wear the bracelet in the first place, Eve, and he shows his compassionate side by using his luck tainted gambling winnings to pay for the young child of someone at his gamblers anonymous meeting to get the operation they desperately need. Towards the end he his working out how luck is a double edged sword by listing what luck he has gained and what bad things have happened immediately afterwards, something I'm sure will come into play as the series goes on and a nice piece of writing showing that endless luck can also be a curse.

There are also so many intriguing questions being raised. Why is Grey pleading guilty to murders he didn't commit? Who sent Harry's wife to be his lawyer? Who is Yuri, the rather psychopathic bald henchman working for? If Liy-Anne Lau didn't kill her father who did? And who is she scared off? And why is there a body in her delivery? Why is DS Winter so hell bent on bringing down Harry? What actually happened in their past?

And why isn't episode 3 on already?