Our small band of Gunters here in The DreamCage universe are reviewing every film mentioned in Ernest Cline's Ready Player One. This week Nate McKenzie takes on Brazil for the very first time...


"I came into this game for the action, the excitement. Go anywhere, travel light, get in, get out, wherever there's trouble, a man alone. Now they got the whole country sectioned off, you can't make a move without a form."

When deciding to view a Terry Gilliam film there are two rules, in my estimation, that one must follow.

Expect nothing and be surprised by nothing.

I knew nothing of Gilliam's 1985 film Brazil before my first viewing. Which is precisely why I chose to watch it for Project RPO. I had heard mostly positive reviews but I avoided any details so as to come away with as close to an uninfluenced opinion as possible.

That was a mistake. Someone should have warned me.

As with most of Gilliam's films Brazil is an experience of sensory overload. Fear and Loathing was a bombardment of drug induced hallucinations. Twelve Monkeys was addled with ultimate paranoia. But those tropes are easy to utilize. In Brazil, Gilliam uses the metronomic clacking and incessant prattling of bureaucratic run-around that makes your head swim in order to set the ambience for the film.

Sam Lowry (Jonathan Pryce) is a paper pusher within the establishment. He is happy with his station but dreams nightly of rescuing a blonde haired woman (Kim Geist) from an array of strange captors. He is complacent outside of events that directly effect him. In one exchange he is asked "Why don't you do something about these terrorists?" to which he shrugs and replies "It's my lunch hour. Besides, it's not my department."

In this dystopian world, citizens are bagged by SWAT-like teams and taken from their homes to be processed, for the slightest of missteps outside the law. Lowry's boss Mr. Kurtzmann (Ian Holm) discovers a clerical error that committed an innocent person to the system and directs Lowry to fix the problem. This leads Lowry down a path that brings him into the vicinity of the woman he has been dreaming about. He also comes into contact with a rogue air-conditioning repairman, Tuttle, played by Robert DeNiro. Then there are car chases, bombs exploding, gunshots, etc etc. All the traditional government conspiracy ingredients are present. 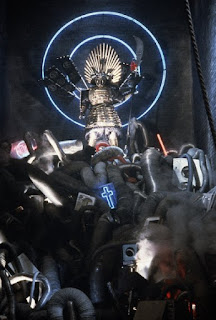 I am easily fascinated by retro-futuristic and dystopian settings with a great story and Brazil was no exception. Part silver-screen era love story, part V for Vendetta, with a dash of The Neverending Story, Gilliam ties together multiple genres to show off his exceptional talents as a writer and director. Much of the cinematography is sublimely inspired. Specifically: during Lowry's dream sequence fight scene with a giant samurai; even if it did feel a tiny bit like a Mighty Morphin Power Rangers battle. But you have to applaud the skilled use of practical effects that make up a large percentage of the scenes.

As an American I have a great fondness for British humour in film and television. Brazil showcases the nuances of humorous dialogue and subtle physical jokes that the English have mastered, but it also throws in some jokes that elicit out loud laughs.

Between Pryce, DeNiro, Holm, Bob Hoskins and Katherine Helmond the cast is loaded. That is a testament to actors' respect for Terry Gilliam's talents and his ability to create worlds that they can invest themselves in. Just as important, though, is Gilliam's ability to draw the viewer in to the world of Brazil.

I expected nothing and was surprised by nothing; save for being pleasantly surprised at how much I enjoyed this lost treasure of film from my favourite era.

If only someone had warned me sooner what I was missing out on.