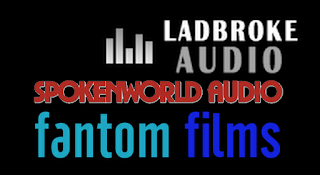 Our friends at Ladbroke Audio Ltd and Spokenworld Audio have announced a new audio partnership with the acclaimed Fantom Films...

In addition to the cross-publishing deal, the two companies are also partnering on the creation of new titles, making use of the established Ladbroke Audio production facilities in Croydon, the digital distribution offered by Spokenworld Audio and CD publishing by Fantom.

Fantom titles that are being distributed by Ladbroke/Spokenworld include the new Lethbridge-Stewart range, celebrity autobiographies and biographies including Joan Sims and Patrick Troughton, and ranges such as The Ghost Stories of Charles Dickens and Toby Hadoke’s Who Talk. New titles co-produced by the companies include A Part Worth Playing by Derek Fowlds, A Constant Alien by Catherine Schell, two new Bob Baker novelisations and the biography of Anthony Ainley.

When asked about the partnership, Neil Gardner, MD of Ladbroke Audio Ltd and Spokenworld Audio told us, "Fantom have been producing some compelling and unique audio titles for years now, and I've looked on with envy as they've worked on many titles I would dearly loved to have produced. So now, having the chance not just to help get those titles out to a wider audience through digital distribution, but to co-produce new titles with Dexter and his team, I am thrilled and excited. Getting to work with legendary names such as Derek Fowlds and Catherine Schell is an honour and a pleasure. I really can't wait to see what else we will be working on as the year unfolds."

The first release by Fantom of work by Ladbroke will be Steven Berkoff’s production of Macbeth, originally produced for BBC Radio Four in 1995. This powerful and chilling interpretation of Shakespeare’s tragedy which, while remaining faithful to the text, reveals Berkoff’s highly original genius.

The two disc release, priced £10.99, will be released just in time for Shakespeare’s 400th Anniversary and features the vocal talents of Linda Marlowe, Craig Charles, Samuel West and William Russell.