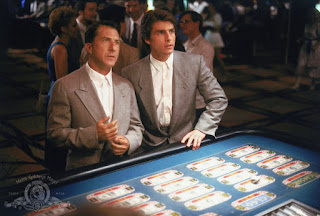 Our small band of Gunters here in The DreamCage universe are reviewing every film mentioned in Ernest Cline's Ready Player One. This week Steve Taylor-Bryant with his thoughts on Rain Man...


I'm very lucky in that my life has been touched by autism. I am not autistic myself, although both my wife and my mother state that I show signs of being on the spectrum, with Dyspraxia in the family and regular contact with those who care for others who have extreme diagnoses, I marvel at what all of these young people manage to accomplish, the way they get through life, the way that, with help, they make nothing but a positive impact on life and the lives of others. It's not always shown this way in the world of Hollywood. The autistic characters just don't seem to be portrayed as real as they should be and often in the writing the affliction is used to drive home a story rather than be the story.

Not so with Rain Man.

It's hard to review Rain Man after all these years without feeling you are plagiarising others' work because there's nothing new a person can add. Tom Cruise showed real signs of the actor he would become and his journey from not knowing of his brother, through using his brother for personal gain, to loving him, holds a special place in my heart and he's not the best thing about the film! No, that's all Dustin Hoffman's performance as Raymond Babbit. How do you play an autistic person in what is essentially a buddy road movie without showing any love or change like a buddy film normally demands? How do you play the part with sensitivity and yet realism? I still don't know how Hoffman did it but Raymond doesn't change because he can't. He needs routine, change is frightening, and Hoffman's straight character performance was stunning. He didn't go for a cheap laugh, he didn't aim for cute or glamorous, he just played it like it is in reality - he was unmoved. There is very little up and down emotional tics with autism. These wonderful people aren't like us. They know the maple syrup should be on the table before the pancakes and will react if it's not because a change to routine can't be comprehended but otherwise everything is black and white and Hoffman really brought that to the screen.

I've not seen a performance by anyone that can touch what Hoffman did and that's what makes the movie still hold up after all these years.