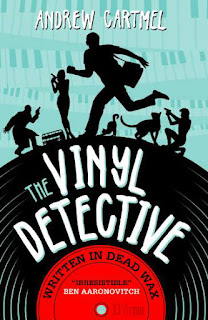 Titan Books announce "a page-turning tale of music, murder and the unlikely dangers of vinyl record collecting" with The Vinyl Detective: Written in Dead Wax by Andrew Cartmel ...

He is the record collector - a connoisseur of vinyl, hunting out rare and elusive LPs. His business card describes him as the “Vinyl Detective” and some people take this more seriously than others. Like the beautiful, mysterious woman who wants to pay him an obscene sum of money to find a priceless lost record. Given that he’s just about to run out of cat food, this gets our hero’s full attention.

So begins a painful and dangerous odyssey in search of the rarest jazz record of them all. A journey that stretches half way around the world and several decades into the past, taking him from his small South London flat to the 1950s West Coast of America and the mixing desk of the most famous jazz label you’ve never heard of.

The start of a brand new style of British crime from legendary TV writer and script editor Andrew Cartmel: Lovejoy meets High Fidelity in a witty and contemporary start to a new series where a rare vinyl classic can be quite literally to die for…

Andrew Cartmel is a novelist and screenwriter. His work for television includes Midsomer Murders and Torchwood, and a legendary stint as Script Editor on Doctor Who. He has also written plays for the London Fringe, toured as a stand­‐up comedian, and is currently co­‐writing with Ben Aaronovitch a series of comics based on the bestselling Rivers of London books.

The Vinyl Detective: Written in Dead Wax is released on 10th May and is available for pre-order now.