TV - Welcome Back to Fortitude 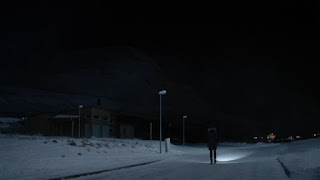 Giving fans their first look at what they can expect when the series airs in January 2017, the trailer features new cast member Dennis Quaid (Far From Heaven) along with Sofie Gråbøl (The Killing) and other dark, chilling and mysterious characters.

Set to the music of Björk’s ‘It’s oh so quiet’, the fast-moving trailer shows a calm and collected Michael Lennox (Quaid) motionless in a frosted car and later, an anxious Governor Odegard (Gråbøl) standing alone in a snow-covered Fortitude poised with a flickering flashlight. The trailer alludes to new threats which face the residents of the isolated Arctic town.

Zai Bennett, Director of Sky Atlantic, commented, “After the chilling events in the first series this terrifying trailer gives Sky Atlantic viewers a glimpse as to what they can expect when this thrilling Sky original drama returns in January. Once again, it is definitely not going to be ‘Oh So Quiet’ in Fortitude!”

The ambitious horror thriller set against the striking Arctic wilderness is from Fifty Fathoms, the makers of the BAFTA-winning Marvellous, and is co-produced by Pivot. Filming took place on location in Iceland and in the UK.