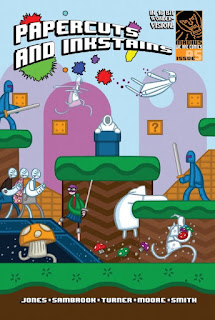 The one thing I've realised since I've gone back to reading comics after a 20 year absence is that my excitement levels are now only raised by a few people. The 'Big 2' are pretty much dead to me and in their place are Monty Nero, Alterna Comics in the United States and, closer to home, the insane team behind Madius. I love these creators, they aren't driven by a corporation to produce money grabbing products, they are in this because they have a story to tell, artists that need to be recognised and because they have a love of something that they choose to share, it's not forced. This is why I get excited. This is why, five issues in, I'm still reviewing Papercuts and Inkstains.

Number 5 starts with a gloriously retro gaming cover in bright colours that sets a different tone to the previous issues and makes an old man like me wish I was back in the day when life was simpler and my Spectrum 48k was cutting edge. This beautiful memory is further enhanced as the first story is a gaming one. Rob Jones, Mike Sambrook and Bob Turner show an excited dude buying his new immersive console and rushing home to plug it in and play. However it's very immersive and the console really does give you what happens on screen.

Story 2 is back to the darker art of previous issues with Vampire Wonderland 2 from the aforementioned Jones and Sambrook with art by Paul Moore. Whilst horror is not my bag, even in their more serious horror stories the guys inject a little humour that keeps me reading, in this case the eyebrow comments, and Moore's art harks back to an older charcoal and pencil era that is very pleasing, the petrol station explosion in particular is stunning in its simplicity yet huge effect. Definitely one for the horror fans that read Madius whilst still readable for those like me that in 40 years have still not 'got' what most people like about the genre. Definitely an artist I want to see more of.

Then we arrive at the ongoing saga. The Profits of Doom. I've really fallen in love with this tale and I don't know exactly why, because it's really not my usual thing. Maybe it's the hapless nature of the Profits, maybe it's because I can see a madness in Jones, Sambrook and Mike Smith and it's good to see it on a page. Maybe it's just because it's hellishly funny and the world needs to laugh now. The art is as stunning as the previous chapters of Profits and the full page poster like sections makes another appearance which, if I wasn't married to someone so house proud, would be stuck up on my living room wall.

In the acknowledgements at the end, the Madius boys are humble in their thanks that people still love their stuff and are almost apologetic that Papercuts and Inkstains isn't themed. Don't be lads! It's the 'something for everyone' nature of the issues that appeal. Even in the stories that aren't written for me I discover something I like, whether that be a joke, a twist in the tale, or a new artist to look forward to seeing again. You have either planned to dominate the future of comics really well or you have lucked into a system that works, either way it's not broke so don't you dare fix it! As you were you insane little people and bring me issue 6!