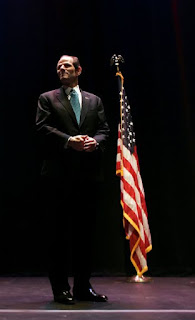 For our Non-fiction Weekend, Steve Taylor-Bryant watches his favourite documentary maker's film about the disgraced Governor of New York, Eliot Spitzer, in Client 9...


In most of my non fiction books just recently about corporate shenanigans and worldwide financial meltdown a name keeps popping up, Eliot Spitzer, with "disgraced New York governor" preceding his name. A lot of the books remark that Spitzer in his guise of the Sheriff of Wall Street would have gone a long way to preventing what happened to our economies if his was still in charge of policing bankers. None of these books though focus on the man himself and I had a thirst to know more so turned to my favourite medium television for answers. I love documentaries. They are the best form of storytelling for me and one man tells the stories better than most - Alex Gibney.

Client 9: The Rise and Fall of Eliot Spitzer is a tale for the ages. Powerful man takes on establishment, establishment not happy so cripple powerful man as soon as opportunity arises. Eliot Spitzer was born into wealth and so had an easier start in life than most but wasn't a man to sit back on his laurels and enjoy life, no he wanted to use what he had for good and quickly rose to the position of Attorney General for New York State. Whilst in office he went after the fat cats that hurt the innocent investor and the companies that the SEC either couldn't or wouldn't punish (as an aside... Everything I read or watch lambasts the SEC so if anyone knows a great SEC specific doc or book please comment below or find me on Twitter?). Whilst in office Spitzer was fearless. He went after anyone or everyone that even remotely didn't play fair and in the process built up a list of enemies that would scare a mere mortal man like I. Two in particular in his time as AG were the chairman of the worlds largest insurance company AIG, Maurice R. Greenberg, who Spitzer sued for financial irregularities and he went after the founder of Home Depot and former director of The New Stock Exchange, Kenneth G. Langone, for paying excessive compensation to NYSE chairman Richard A. Grasso, and yes even on Wall Street $139.5million is an excessive retirement package.

With enemies like these Spitzer needed to watch his back but his star was rising and he was elected with over 60% of the vote to be Governor of New York with some remarking that he had all the goods to go on and be the first Jewish President of the United States. Spitzer though doesn't play politics well and soon discovered that you can't run a state like a lawyers office. More powerful enemies were born in Republican State Senate leader Joseph L. Bruno, who Spitzer tried to convict of misusing state money to have police escorts everywhere in the scandal known as Troopergate, and Bruno's strategist, a very strange man named Roger Stone who was the first to discover that the governor was using a high class escort service which led to Spitzer having to resign his position in disgrace. The strange part for me though is that charges were never brought against Governor Spitzer when the Federal Government went after the agency, the testimony of Spitzer's favourite girl to hire was leaked to the press at at federal level, a one off girl, Ashley Dupre, somehow managed to make a career in the right wing Murdoch press from the scandal, but whilst jail time was rightly served on those who ran the agency it was never usually the customers the Feds went after. The fact that Langone even had a 'friend' standing behind Spitzer in a post office when he was paying for the girls just screams conspiracy. Rightly and morally Spitzer lost everything but he was a man who brought legislative change at every step, trying to fix both business and politics and I can't help but dwell on a line from the film 'Clinton got a blowjob in the Oval Office and never got scrutinised like this' and wonder if perhaps the world would be a better place if an indiscretion like this was forgiven and Spitzer was left fighting evil. We'll never know of course.

The film itself was typical Gibney. It showed both sides in a fair manner and never was any personal opinion of the film-maker pushed upon the audience, you really can make up your own mind. Seeing the Governor interviewed by Gibney and facing the questions we'd all ask was both informative and entertaining, and he strikes me as a decent, yet hard, man who is obviously living with his mistake. The businessmen and politicians feel as vindictive and wronged as you'd expect powerful men on the edge of corruption to come across, and the young woman who was actually questioned as Spitzer's escort, played by an actress for safety reasons, was a lot smarter and business like than I imagined and added to the narrative of the story well with factual and detailed accounts whilst never becoming gratuitous. Gibney pulled off another top film with Client 9: The Rise and Fall of Eliot Spitzer and it's very easy to see why he wins many awards for his work.