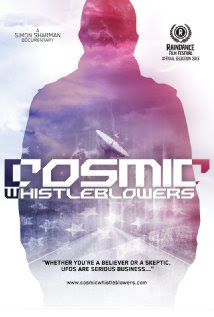 Is the truth out there? Chris Smith beams into Raindance to watch Cosmic Whistleblowers...

No matter what one think about the study of UFOs or unidentified flying objects, the premise behind the field is a logical one. Given the size of the universe and humanity's own existence, life must exist elsewhere (a fact science seems on the cusp of confirming). If so, these extraterrestrial civilisations may have the ability to visit us and considering the impact this would undoubtedly have on our own civilisation, governments might not share that information with us.

The events that occurred in Roswell, New Mexico in 1947 have captured the imagination of millions in the decades since. If an alien craft did really crash in the desert, then evidence of that would be evidence we were not alone. The only problem is that no irrefutable evidence has been found and the U.S. Government has been less than open about what happened.

Cosmic Whistleblowers is a personal journey by self-confessed believer and filmmaker, Simon Sharman. He travels to Roswell to speak to those who have never stopped searching for the truth. Sharman puts famed UFO investigator, Donald Schmitt, front and centre as he conducts his own search for evidence. While Schmitt is open at first, he quickly turns away from Sharman when it's announced that Schmitt has gained access to a collection of photos that might prove something inhuman was recovered from the crash site. Is this the proof ufologists have been looking for?

Sharman speaks to several witnesses to what happened, they have never changed their story and have even been threatened to stop them from speaking out. The similarities between the testimonies is astounding and the military prescience that descended on the town is proof that something happened and great lengths have been taken to ensure that the nature of that something is never revealed.

However, as Sherman himself admits, Roswell is one of the most well documented events of its kind and there is little in Cosmic Whistleblowers that casts fresh light on the subject. Skeptics can rest easy as there isn't any challenge here. However, Cosmic Whistleblowers is a fascinating glimpse into some of the personalities of the ufology movement and their earnest desire to uncover the truth. Schmitt is a writer with an air of the showman about him while other investigators have turned to politics in an attempt to have the White House disclose what they know. These people are miles away from the public image of the tinfoil-hat-wearing lunatics a cynical media presents us with. this doesn't mean they don't have their own agendas and in many ways any evidence is a means to further them.

As entertaining and interesting as Cosmic Whistleblowers is, it doesn't offer anything new. The truth may be out there but it certainly isn't in here.