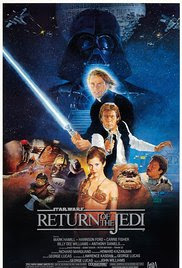 Our small band of Gunters here in The DreamCage universe are reviewing every film mentioned in Ernest Cline's Ready Player One. This week David Ames finishes the original Star Wars trilogy with Return of the Jedi...

This is the third and final instalment of my take on the original trilogy of Star Wars. While I stated before that Empire Strikes Back is widely considered to be the best of the franchise, best does not always translate to favourite. Across the fandom of the Star Wars universe, many hold Star Wars: Episode VI: Return of the Jedi to be their favourite.

As is always the case, we begin with “A long time ago in a galaxy far, far away” and then, of course, the crawl. This time, the floating text reveals that Luke has returned to Tatooine to rescue Han and that, unbeknownst to him, Darth Vader, the Emperor, and the Empire have begun construction on a new, larger, more powerful Death Star.

Much like A New Hope, Return of the Jedi begins with star ships and space and then we get to see the arrival of Vader at the new, incomplete Death Star. This is just a small precursor to the story which begins moments later with R2-D2 and C-3PO wandering through the desert to find Jabba the Hut’s lair and deliver a message from Luke. Jabba, a giant slug-like creature, is the Al Capone of the Star Wars universe. He is a gangster and a crime boss and he has raked in the profit of these enterprises, amassing a posse that would make Kanye West look like Dustin Diamond.

R2-D2 delivers the message from Luke asking to barter with Jabba for the life of Han Solo. Also, Luke claims to be a Jedi knight, although we haven’t seen him receive any additional training after getting his ass kicked by Darth Vader at the end of Empire. Shenanigans ensue and Solo is freed by Leia only to be captured again. Now Jabba has all of the main cast except Luke and Lando (who is actually disguised as a guard at Jabba’s palace). Luke arrives, threatens Jabba, fights and kills a Rancor (a giant monster-like creature Jabba keeps as a pet) and then is captured as well. One must wonder why he doesn’t use the force and instead throws a rock but whatever. It gets the job done.

The gang’s all here.

After quite the elaborate plan, Luke frees everyone, saves the day, Leia strangles and kills Jabba, and a temporarily blind Han Solo accidentally kills Boba Fett. You read that right. The most badass bounty hunter in the Star Wars Universe gets killed by a goddamn blind man and his fumbling. Honestly, other than looking badass, Boba Fett is worthless in the original trilogy.

Next Luke returns to Yoda to finish his training but that puppet is on death’s door so he just affirms that Vader is Luke’s father, tells him there is another Skywalker, and disappears to become one with the force like Obi-Wan did in A New Hope. After receiving no help at all, Luke returns to the rebels who have received plans of the new Death Star and find out that the Emperor is on board. They kill him and evidently the Empire is destroyed.

Don’t look too deeply into that logic. Only pain you will find.

The third act of the film is an amalgam of almost every genre possible. There is the George Lucas version of a car chase (speed bikes), there is the addition of an adorable, yet strange new creature known as an Ewok, there are more mechs and chances to sell toys, there are epic hand-to-hand (paw?) battle scenes, there are sword fights, magical powers, spaceship battles. It’s everywhere and it is awesome. Ewoks, just for clarity, are basically tiny teddy bears who resemble native people. Wicket, the main Ewok, was played by Warwick Davis of Harry Potter, Willow, and Leprechaun fame.

Once again, I am not going to divulge everything. Just go watch it again.

In the end, we learn a valuable lesson, Luke gets to reconcile with his father, there are so many explosions that the mere mention of the ending gives Michael Bay a hardon, and there is also the accidental incest plotline that just gets gingerly swept under the rug, although if you watch closely, you can see Han thinking about it for a second. The movie ends, as all great space operas do: with a dance party populated by humans, robots, and adorable teddy bears. Think about the end of Top-Gun, replace the homoeroticism with subtle incest, and add stuffed animals and you’ve got a pretty clear picture.

Return of the Jedi is without a doubt the most fun of the original trilogy. A New Hope establishes the universe and the characters. The Empire Strikes Back gives us character development, depth and surprise, and whole story progress. Return of the Jedi combines what works about the first two and adds in a splash of fun for good measure. Jedi is the perfect ending to the original trilogy.

Don’t listen to anyone who says that the movie is stupid or that the empire being destroyed in part by Ewoks is idiotic. The movie works because we want it to. Because we love it for those very reasons. If someone says it isn’t worth watching, don’t listen, because in the immortal words of Admiral Ackbar: “IT’S A TRAP!”

The original title was Revenge of the Jedi but Lucas changed it because Jedi do not seek revenge.

The director, Richard Marquand was actually the fourth choice. Stephen Spielberg, David Lynch, and David Cronenberg were all thought of before Marquand.

Carrie Fisher has said that there was no room for underwear under the Slave Leia costume so sometimes, people really did get an eyeful. 12 year old me likes this even more now.

Alternate forms of the script included Luke taking over for Darth Vader, Harrison Ford sacrificing his life for his friends, Obi-Wan Kenobi coming back from the grave, and no Yoda appearance.