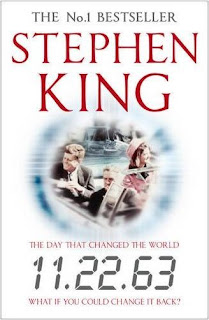 With Season 1 of the TV series now out on DVD, here's a reminder of Steve Taylor-Bryant's review of the original Stephen King time travel novel, 11.22.63...


Whilst not a horror, 11.22.63 is still an epic Stephen King novel with only one giant flaw but we shall get to that later.

English teacher Jacob "Jake" Epping comes across a story in his adult reading class, written by the caretaker of the school, that just breaks his heart. It is a tale of abuse at the hands of an uncaring, violent father. Whilst the actual writing is nothing special, the tale on the paper really gets to Jake. After taking the caretaker, Harry Dunning, to his local diner, the restaurant's owner wants a meeting with our emotional teacher and the bizarre time travel abilities from the store room of the diner are spoken of for the first time. The owner Al is dying and begs a favour of Jake, go back in time and stop the assassination of John F Kennedy.

Through the diner's portal you live everyday as normal whilst only actually being missed from the present for a few minutes. The idea begins to take shape and Jake decides that he can help others whilst he is back in the past. He starts by saving a hunter from accidentally shooting a young girl, an act appreciated by the hunter's wife who somehow knows that Jake is an anomaly there to help. With a few years to go before Lee Harvey Oswald pulls the trigger in the 'shot heard around the world' Jake decides it's time to set up home in a small industrial town where his caretaker, Harry, is a young boy. He follows the father around, with the eventual aim of saving Harry and his family from the tragedy that should unfurl before them.

It takes a couple attempts at living in the past to start getting things right and since every trip starts again in 1958, five years before the JFK shooting, each time our hero has to effectively re-live each day, allowing him to make subtle changes, change his identity to George Anderson, and pop to and frow which for some reason seems to anger the local alcoholic, dubbed The Yellow Card Man by Al, waiting outside the portal's entrance.

Eventually, after righting the wrongs, Jake/George finally moves to Texas and the stalking of Oswald begins. During certain periods, Jake/George had won money by gambling on events he already knew the outcome of, always a risky proposition, and eventually decides to take a job as a teacher to supplement his income, rather than annoy yet more gangster types.

Whilst teaching, inspiring the youth, and generally being liked, Jake/George falls in love with a librarian, Sadie, who herself was haunted by her past.

The following of Oswald continues, the love affair blossoms, but the time edges nearer. As you would hope, King doesn't make it simple and personal tragedy, falling trees and much more, occur as history fights the changes in the time line.

The descriptions and face that King puts on the late fifties/early sixties makes me wish it was an era I grew up in. From the root beer descriptions to the fashions, we are shown a different world.

Now for the massive flaw. In his author notes, King admits that his son Joe Hill gave him the ending we got. I'm not a fan of Joe Hill or his style. The penultimate chapter was astonishing writing. The dystopia of a ruined world, due to the events of the past changing so dramatically, was incredible. Not just the huge world changing events but the little interactions and character twists that had occurred, showing that even the smallest change has a massive effect, were stunning. And a great end to the novel, except that wasn't the end. Mr Hill convinces Daddy that a happy ending is needed and everything needs wrapping up in a pretty bow.

This would have been Stephen Kings best ever tome. A scifi/horror/dystopian/reality novel that would never have been matched and would have been the bar that all other time travel books were judged on. Instead it's an epic novel that falls flat on its face in the closing chapter.