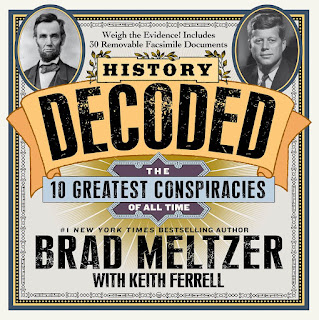 Steve Taylor-Bryant literally examines the evidence as he reads History Decoded: The 10 Greatest Conspiracies of All Time by Brad Meltzer and Keith Ferrell...

In a world consumed by technology Brad Meltzer, my favourite author of all time, has produced something distinctly old fashioned and I absolutely bloody love it! I'm a conspiracy nut, not a tin foil on the head, the government are listening to me type but, whilst I don't believe half of the conspiracy I read, I can't help but seek out all of them to see if I can solve them. It's why I love Brad Meltzer novels, there's always something historical and conspiratorial in them, and, as the host of the Decoded show on television, his passion for answers is infectious. How do you put all that in a book though and make yourself more relevant than the rest of the conspiracy essays on the market? You appeal to my inner child and give me things I pull out and play with!

This is like a pop up book for grown ups. Each of the ten conspiracy theories is laid out in writing with a level of detail you'd expect from something with Meltzer's name attached, with what we know for sure about each story and then the possible theories that have grown into legend over time. There are no answers to these conspiracies but Meltzer and Ferrell fill little pockets within the chapters with evidence for you to peruse and make your own minds up. Actual evidence mind you, great recreations of real documents and the like, not just scraps of paper, we're talking Kennedy's death certificate, maps, alleged wills. Goosebumps form as you pull out the evidence. Your inner child and well formed adult mind working in tandem.

The conspiracy content is well known. John Wilkes Booth, Confederation gold, DB Cooper and The White House cornerstone are are favourites of mine and sit well with The Spear of Destiny and Fort Knox. No conspiracy book is complete without the Kennedy assassination or Area 51. Leonardo Da Vinci and whether he predicted an apocalypse was brilliant reading and the Georgia Guidestones was one I wasn't familiar with so fascinated me.

Meltzer and Ferrell's History Decoded is one of the most fun books I've read since I was young and is a must read for anyone who has interest in conspiracy or with pulling things out of books.