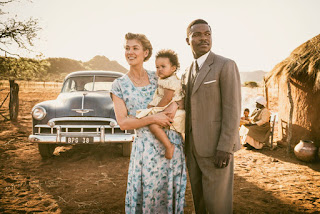 A United Kingdom was the choice for the Opening Gala Film of The BFI London Film Festival 2016. Ren Zelen gives us her thoughts (with spoilers)...

Achieving some absorbing storytelling, director Amma Asante and screenwriter Guy Hibbert reveal a noteworthy chapter of Britain’s post-war history. A United Kingdom is the opening film of the 60th London Film Festival and is the based on the true story of Seretse Khama (David Oyelowo) a young law student in London in 1947, who also happens to be the Prince of Bechuanaland (now Botswana). His country is a British protectorate which effectively submits to imperial control (tribal leaders being nominally allowed to rule) in return for stability and protection from its rapacious neighbours.

While completing his education, Seretse falls in love with Ruth Williams (Rosmund Pike) a reticent young woman employed as a typist supervisor. After a whirlwind romance they scandalize society by getting married. It may be hard to imagine now, but in the 1940s the idea of interracial relationships was enough to alienate families, have racist and bigoted insults thrown at one in public and occasionally even provoke violence.

After their marriage they hope to escape a largely segregated London and return to Seretse’s homeland where he is destined to rule. However, they return to the disapproval and rage of Seretse’s uncle Tshekedi, (Vusi Kunene), who has been acting as regent while his nephew was away, and they must also face the disdain of the people of Bechuanaland, suspicious of a white, British woman on the arm of their future king. They are understandably resentful of an interloper aspiring to be queen and to represent a tribe of black people she has no knowledge of or relationship with. 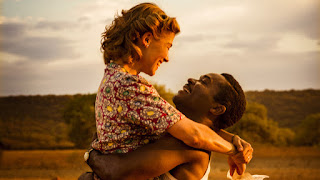 This setback however, is nothing compared to the infuriated political jockeying of Her Majesty’s Government, terrified that South Africa will take the marriage as a provocative affront to their policy of Apartheid and retaliate by leaving the Commonwealth and depriving Britain of its gold and minerals.

An ‘inquiry’ is instigated in order to ascertain whether Seretse is fit to take responsibility for his nation. Unsurprisingly, the result provides a pretext under which they can separate Seretse and Ruth and then pronounce him exiled in England for the next five years.

Seretse’s fight to return to Ruth in Bechuanaland and claim his birthright turns into a wearing legal battle. He is supported by an idealistic young labour MP called Tony Benn who, amongst others, is frustrated by Prime Minister Clement Attlee unwillingness to stand up to South Africa’s veiled threats.

Seretse is aware however, that a mining expedition in Bechuanaland is set to find diamonds and that his country now has a coveted resource that should rightfully be channelled to his own people. He plans to counteract attempts to make Ruth and himself pawns in the ensuing political machinations.

There ensues a political squabble - British representatives, smug Alistair Canning (Jack Davenport) and priggish Rufus Lancaster (Tom Felton) attempt to secure British interests by intrigue and duplicity, deploying all means to further their own agenda, including using their wives to charm Ruth.

Churchill’s Tory government raises hopes after promising to support Seretse’s claims if they win the next election, but once in power they do the exact opposite – Churchill increases his exile to lifelong banishment. Agreements are left unhonoured and promises broken as the government continues its attempts to wrest control from the Khama family without angering the native people or flying in the face of South Africa’s ugly policy of Apartheid.

Even though the movie notes everything done to destroy the marriage and to undermine Khama’s legitimacy, it also hints that Seretse’s marriage may have been the least of the British Government’s worries. After gaining an education in England for nearly 20 years, Seretse was astute enough to recognize how he and his country had been manipulated, and to retaliate with some manipulation of his own.

He obtains documents which would expose the government’s duplicity and strikes an agreement not to expose them and to renounce his royalty in favour of advocating a new democratic system that would finally give his people control over their own country, and reunite him permanently with his wife and his infant daughter.

Rosamund Pike and David Oyelowo give beguiling performances as the Englishwoman and African man who fall in love. There’s a chemistry within their relationship which exudes innocence and optimism and also an oddly British decorousness. Ruth’s African husband never underestimates his wife’s intelligence or resilience, the way that her condescending countrymen do, which allows them to combat their English adversaries together, using their intellects as well as the strength of their love.

A United Kingdom offers an impressive sense of place and period, both in grimy, post-war London and in the dreamy, dusty landscapes and sunsets of Africa. It also deals with complicated political issues with clarity and simplicity. The film displays the warmth and style of a kind of movie rarely seen today, reminiscent of the affection and wit of Richard Attenborough’s erstwhile epics.

A United Kingdom deals with humanity and history and presents a story where the power of love was the catalyst which ultimately won independence for the people of the Democratic Republic of Botswana. The film may suffer from accusations of naïveté, but it is infused with a heartfelt candour in its unfashionable conviction that love can conquer all.