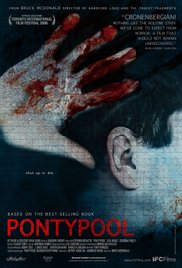 2008’s Pontypool was a sleeper of a film for me. I had heard nothing about it before my good friend Andy Fox suggested we watch it, having read something on Bloodydisgusting about the movie. We sat down to watch and were blown away by what was presented. This film, adapted by Tony Burgess from his novel Pontypool Changes Everything, presents an entirely new and interesting take on the zombie genre.

Grant Mazzy, radio shock jock fallen from grace, works at a new job in the small community of Pontypool, Ontario, Canada. During his early morning radio show, he receives a report from the local weatherman of a protest at a local doctor’s office which goes from bad to worse as the crowd begins to grow ravenous and crawl overtop of one another, swarming to get inside. As the story progresses, things become more intense and hordes of people begin to destroy one another, tearing with their teeth. I don’t want to give away the ending but I will say that the premise of this movie is unlike anything I have seen before or since.

In this world, the virus is spread through language, namely baby talk, terms of endearment, and the English language as a whole, and as words spread between people, so does the virus. It presents itself by causing people to become stuck in a loop, repeating the same word or phrase over and over, unable to comprehend what they are saying until they go mad, having no other option but to chew through one another in the hopes of understanding anything. Director Bruce McDonald said this about the sickness: “There are three stages to this virus. The first stage is you might begin to repeat a word. Something gets stuck. And usually it's words that are terms of endearment like sweetheart or honey. The second stage is your language becomes scrambled and you can't express yourself properly. The third stage you become so distraught at your condition that the only way out of the situation you feel, as an infected person, is to try and chew your way through the mouth of another person.” This concept should be worth the price of admission in itself.

The film uses very little in the way of set, only showing different aspects of the radio station, but in so doing it captures the sense of claustrophobia that the actors are experiencing. Speaking of actors, all who play roles in this film are stellar. That being said, famed character actor Stephen McHattie, whose repertoire is far too long to list, plays Grant Mazzy with awe-inspiring gusto. I have seen him in dozens of films and television shows but this, for me, is his greatest performance. He is truly amazing and captivating.

This film is a must see for anyone who enjoys horror and especially for those who love zombie movies. There are little to no actual zombies in the film but those that do show up, especially the assistant Laurel-Ann, are done with perfection. This film is available as of now to stream on Netflix so push play and enjoy a new take on an old, established genre. The time spent is well worth it.