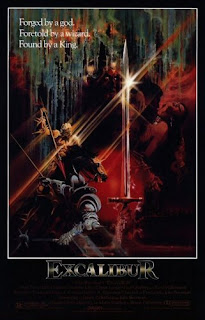 Our small band of Gunters here in the DreamCage universe are reviewing every film mentioned in Ernest Cline's Ready Player One. This week Susan Omand takes on Excalibur...


The myth of King Arthur brought once again to the screen. Uthur Pendragon is given the mystical sword Excalibur by the wizard Merlin. At his death Uthur buries the sword into a stone, and the next man that can pull it out will be King of England. Years later Arthur, Uthur's bastard son draws Excalibur and becomes king. Guided by Merlin, Arthur marries Guenivere and gathers the Knights of the Round Table. Arthur's evil half-sister Morgana sires a son with him, who may prove his downfall.

The trouble I have with Excalibur is, mostly, Monty Python’s fault. Because of films like The Holy Grail (and the Knights that say Ni,) I can’t take Excalibur nearly as seriously as it takes itself and, boy does it take itself seriously. I end up sniggering all the way through it, which is a shame and entirely my fault, as it is really quite a good retelling of the King Arthur, but the overblown dialogue in inexplicably Irish brogues, the declamatory acting in the major set pieces, from the likes of Corin Redgrave who plays Cornwall and the delightful Nicol Williamson as Merlin, and the bloody idiotic fight scenes, especially when they’re ineffectually firing flaming “rocks” at obviously polystyrene castle ramparts from the catapult on the beach, it’s straight out of Baron Munchausen. This can’t all be the fault of the cast, which, for its time – the film came out in 1981 – had some immense names from classical theatre, like the aforementioned Nicol Williamson and now-national-treasure Helen Mirren, as well as several “young and upcoming actors” like Patrick Stewart, Gabriel Byrne and Liam Neeson. Even a boyish Charlie Boorman got some screen-time – but I’m sure that’s just because his dad made the film. But I think the casting and John Boorman’s directorial style had a lot to do with the almost Shakespearean pomposity of the film. Oh, and the fact that it’s well over 2 hours long.

If you can get past both the melodrama of the dialogue and the Pythonerie of the acting though, it’s a very good fantasy film and incredibly violent for only a 15 certificate, although it came out at a time just before the board of censors changed from one classification to another so it maybe just slipped under the radar without much forethought. Like I say, it is a fine retelling of the King Arthur/Sword in the Stone/Lady of the Lake story that doesn’t sugar-coat the battles fought, nor the consequences of losing, or of winning for that matter. The gore level is suitably high with a lot of the red stuff splashing around and the sexual content is suitably rough, whether explicit or inferred – although sex in full armour is still a neat trick if you can do it.

As I said before the effects in the film are a bit ropey, but that is more to do with the technology of the time than anything else and I think there would be quite a bit of mileage in remaking the story now that the tech and FX has caught up with the imagination – the fighting for a start wouldn’t look nearly so blundering. I know they did the Saturday Teatime friendly version of the King Arthur story with Merlin and it was a huge success but I would like to see a “grown up” version, with similar levels of gory violence to this original, especially since the success of Game of Thrones, of which this is a natural pre-cursor, although I fear it would now be seen as somewhat bandwagon jumping.