Doctor Who – The Next Doctor 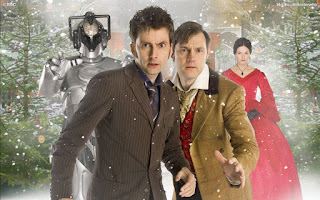 Only one day until we get new Doctor Who courtesy of the now traditional Christmas special. While we wait Tony Cross is revisiting the specials of Christmas past. Here is his thoughts on The Next Doctor…

The Next Doctor isn't bad. Being a Christmas Special it has that additional level of feel good cheesiness that seems to have become de rigeur, although we do get one or two hints at a far darker story here. Not just with the Doctor's story but in Miss Hartigan's (Dirvla Kirwan), in Rosita's (Velile Tshabalala) and in Jackson Lake's (David Morrissey).

Anyway back to the story. This is entertaining enough and I love the way we're plunged straight into the mystery. Who is this other Doctor? Why doesn't he recognise his younger self? And the gradual revelation is both rather nicely done and movingly played by both Tennant and Morrissey. You feel for both of them as the one's fate echoes the other.

And Morrissey's Doctor is brave and clever and resourceful. He's even built his own TARDIS - the revelation of which is one of my favourite moments in the episode - so he's pretty cool all things considered. His companion - who is forced to live up to the clichés - is Rosita. There's no real explanation of who Rosita is but Miss Hartigan's little dig implies that she is - to use a phrase of the time - a woman of ill repute. She's got guts though and like proper companions doesn't take orders from the Doctor particularly well.

The Cybermen are back. I don't like New Who Cybermen. I think that whilst they look rather nice all that marching makes them rather tedious and to be honest if there's one thing that my Doctor Who re-watch has taught me it is that Cybermen stories aren't generally very good (with a couple of honourable exceptions). On paper they're a horrific foe and the horror that they represent as a future version of us is rather good but it doesn't work often enough, although Big Finish seem to have cracked it on audio. Perhaps someone at the BBC should ask Big Finish for help the next time the Cybermen crop up.

Miss Hartigan is the human villain and fits into that long, long line of human allies of the Cybermen that fail to realise that at some point the Cybermen will turn on them. Miss Hartigan, whose clearly a woman with a strong mind, almost turns the tables on them though. Her story, which is hinted at, is clearly not a pleasant one and she's become hard and cold.

The problem with this story is that the ending just seems too easy. There's something vaguely cheating it. I can't quite put my finger on why but would Miss Hartigan really have gone from what she was to screaming self-destroying in such a short hop? This is a woman that was able to overcome Cyber Control and make them obey her. It just seems to undermine a strong female villain by turning her into a screaming hysterical girly in the last frame, which ends up blowing up the Cybermen and her for some bizarre and convenient reason. And odd though it is to say this I don't think it is fair on Miss Hartigan's character.

So whilst this is OK enough it's not the greatest of stories.

Applause for the Tennant and Morrissey whose 'Two Doctors' moments are quite fun. Plus the joy of a nice squee moment when we get to see all the previous Doctors via a Cyberman infostamp but in the end it is rather disappointing.