Doctor Who – Voyage of the Damned 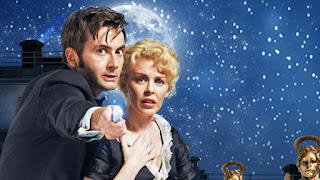 Only one day until we get new Doctor Who courtesy of the now traditional Christmas special. While we wait Tony Cross is revisiting the specials of Christmas past. Here is his thoughts on Voyage of the Damned…

The problem is with Voyage of the Damned is that it is pretty forgettable. Even as I write this bits of this story keep drifting away from me like icebergs, which is ironic considering all the Titanic references.

Viewed as a kind of homage to the festive disaster movie and it is OK. Truth be told OK is pretty much the best description I can think of for this story. It's not awful. The acting is mostly up to snuff, even if most of the cast are clichés or designed purely to make a point, although I George Costigan's Max Capricorn definitely skirts the edge of ham but I suspect he was asked to make him like that so the blame lies elsewhere I think. And could Rickston Slade (Gray O'Brien) be any more of a capitalist cliché?

Let's face it the Doctor must be suffering from a pretty terrible case of survivor guilt and you start to wonder whether perhaps underneath the series adventurous veneer there isn't a much darker and more terrible programme about the survivor of genocide and war with a death wish who is desperately trying to distract himself from the horrible memories. Unfortunately with each adventure, despite his constant victories against terrible odds, the list of the dead grows longer and the Doctor's guilt goes deeper.

And in typing that paragraph almost everything about that story is lost: Geoffrey Palmer gets to be his lugubrious self in New Doctor Who having appeared in the Classic series, Clive Swift is good as Mr. Copper also adding himself to the list of actors who've done the Classic and New Doctor Who. There's a really awful Allons-y-Alonso joke. Bannakaffalata (Jimmy Vee) is rather sweet and is used to make some rather superficial but politically correct comments about prejudice. The special effects look great.

The robots appear to have been ripped right off of Robots of Death, but that's OK. There's a rather sweet over-weight couple Morvin & Foon van Hoff (Clive Rowe and Debbie Chazan) who are clearly too in love and happy to survive the story to the end. There's a nice little bit of stuff involving Kylie's...sorry Astrid's shortness when she gets to kiss The Doctor. The Doctor kisses a ghost in a rather disturbing bit at the end revolving around trying to save Kyl...Astrid.