Doctor Who – The Snowmen 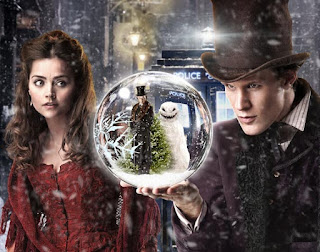 Only one day until we get new Doctor Who courtesy of the now traditional Christmas special. While we wait Tony Cross is revisiting the specials of Christmas past. Here is his thoughts on The Snowmen…

Just as I was about to watch The Snowmen I realised that I hadn't actually watched it before. Bizarre. That makes this a landmark. It's the last Doctor Who episode - before the Capaldi - that I have never seen or heard. Obviously I'm too young to have seen the Missing Episodes. So woo-hoo.

We finally get to meet Clara. For a bit. She seems to have issues with dying of a similar nature to Rory. From Asylum of the Daleks we know that there is something odd about Clara. Something mysterious. As an audience we're allowed to be ahead of the Doctor on this. We know this is Clara because we've seen what she looks like. Although why it takes the Doctor so long to pick up on her voice sounding exactly the same as Owin's is rather odd.* But I'm putting it down to the Doctor being a little rusty after a prolonged post-Amy and Rory sulk.

There's no surprise that the Doctor has retreated to a cloud in a sulk. The first part of Series 7 - and the latter part of Series 6 - seemed to have been calculated to make the Doctor feel incredibly guilty. So he's changed his outfit to something darker, something Dickensian and gone for a long sulk. The Paternoster Gang - Jenny, Madam Vastra and Strax - have been keeping an eye on him and tried desperately to get him to cheer up but so far they've failed.

Now I'm an old-fashioned Doctor Who fan and another companion with wrapped in a mystery is initially going to get me a bit antsy. I'm longing for a companion without baggage but if you're going to make the woman mysterious then making her interesting helps. It's early days for Clara so I'm not going to comment too much but I like the cut of Jenna Coleman's jib. She's got good comic timing, which I like. She also gives Clara a bit of spirit. (I refuse to use the word feisty. It has become something of a New Doctor Who cliche.) She's got the companion qualities of dangerous curiosity and selective hearing so is ideally placed to get herself into trouble. Let's see how this all pans out shall we. Even if it'll be a different Clara. Or the same one. Who kno...sorry, I said I wouldn't do that again.

Another good thing in this story is Richard E. Grant as Dr. Simeon. The main face of the enemy. His delivery is suitable cold and he's blessed with a face of such angularity that you'd cut yourself on the sneer. The voice of the enemy is Sir Ian McKellan. Mostly.

It's interesting that the end of this story sees the Doctor helping to birth an enemy that he has already fought and defeated twice. A long time ago. He also - for reasons I haven't quite worked out - give that enemy a tip on a strategic weakness that will lead to trouble for his earlier self. Good old Steven Moffat. He can never avoid a bit of timey-wimeyness if given the opportunity. I'm not sure why the Doctor doesn't recognize the name of the enemy he creates at the end. I'm not sure whether we will get an explanation or not at some future point. I'm not even sure if it is important. I'm being a little vague about who the enemy is just in case - like me - you've not actually seen the episode. Although why you would read a blog about a story you haven't seen slightly baffles me. If that's what you're doing go away and watch it now. Then come back to me.

Kudos to Neve McIntosh, Catrin Stewart and Dan Starkey for their usually high standards of work as the Paternoster gang. We get to learn a little more about Madame Vastra and Jenny's living arrangements, which is nice. Dan Starkey's Strax is great. The Sontaran Butler with a penchant for a violent solution to any difficulty. The problem now of course is that you're in danger of being unable to have the Sontaran's return as out-and-out villains if you keep playing them for laughs, which seems the waste of a good enemy if you ask me. Which you didn't.

Ironically I almost forgot the Snowmen. I liked the idea of man-eating Snow(men) but after our pre-credit sequence they didn't really do much except pop up here and there and look snarly. The same thing goes for the Ice Governess. Impressive to look at. Quite scary in her way but underused.

*This comment of the Doctor's about her voice makes the issue of why Clara's voice was human over the microphone in Asylum of the Daleks but Dalek when she was in front of him. I'm sure Steven Moffat has an explanation. Actually I'm not sure he does but it probably isn't that important so I should stop worrying about it.