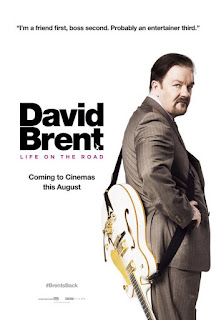 Marc Nash recently watched the Ricky Gervais mockumentary David Brent: Life on the Road, out on DVD this week. Here, he shares ten reasons why you REALLY shouldn't do the same...

David Brent: Life on the Road sees the highly anticipated big screen debut of one of comedy’s best-loved characters, David Brent (Ricky Gervais). The film catches up with Brent twelve years on from the BBC mockumentary ‘The Office’ to find he is now a travelling salesman with Lavichem, a cleaning and ladies’ personal hygiene products company. However, he hasn’t given up on his dream of rock stardom and is about to embark on a self-financed UK tour with his band, ‘Foregone Conclusion’. Assembling a group of session musicians who are just in it for the money, and talented rapper Dom (Ben Bailey Smith) in an attempt to gain street cred, Brent cashes in his pensions and takes unpaid leave in a bid to turn his dream into reality. Get ready to join David Brent on the road as he takes one last shot at fame and fortune.

and TEN REASONS to avoid watching it...

1) The Office and the David Brent character retired from our TV screens on a high. Bringing him back however many years on could only lessen his reputation.

2) The difference between a weekly episode on TV and everything being squeezed into 90 minutes of celluloid, means you don’t have the same time to move and grow with the characters. Their little emotional shifts and developments are less subtle in the film. Well, actually, there aren’t any. No one in the band likes Brent, then they all suddenly do by the end. Oh yes, the TV series just about managed to rein in the sentimentality (unlike, say, the Royal Family) but the movie lamentably fails to do so.

3) On the other hand, the excruciating social interactions here seem totally forced and for (misfiring) comic effect. Expressing your discomfort/humiliation to camera works on a small screen, not so much on the silvered one in your Multiplex.

4) Brent can’t sing. Okay, even if you are daft enough to find that funny first time round, the joke of it cannot hold up beyond the first song. One can’t help but see this as a vanity project for Gervais, maybe he did harbour a secret desire to be a musician and now has the bunce to bring it about. But if that’s meant as layers of comic irony, they all just fell flat and collapsed into one ugly splotch.

5) Trying to embody Brent’s shrunken world view in song is really hard to do. And it fails. The songs are neither big, funny or clever. His localism rhymes ‘Gloucester’ with ‘Costa’ (Coffee) and he has a song about Native Americans. The joke is of course how un-rock-and-roll he is, but it’s not a funny ha-ha joke. It’s just dumb.

6) Brent’s unpleasantness in the TV show was ameliorated through being offset by the real humanity of the supporting cast. Here, right from the off, all involved know he’s a tosspot. His awfulness has nothing to play off, as each vox pop given by a band member says how terrible Brent is and we can but only agree.

7) Like real rock and roll tours that move from tour-bus to hotel to venue to soundcheck to gig, the scenes of the film are equally limited. It gets repetitiously dull very quickly.

8) The unrequited love interest for Brent is so unbelievable and badly written. She must be a masochist and not in the sexual sense, but in the emotionally bereft one, only able to experience an emotion when cracked over her with a sledgehammer.

9) Brent defends Sting as a cool musician. Not funny, even ironically.

10) What the hell is Doc Brown doing in this movie? I know he’s a mate of Gervais’, but here he’s a funnyman forced to play the stooge, a genuine musical talent forced into the backing singer (rapper) role. What a criminal waste.

Avoid this film at all costs. I didn’t laugh once.

His books are available from Amazon here. Image - IMDb

If you still really want to buy it: