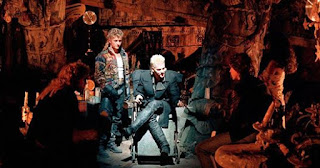 Special event anniversary screenings have been announced for next year's Glasgow Film Festival...

Glasgow Film Festival 2017 has announced special anniversary event screenings of three cult classics: The Lost Boys at a secret location; The Princess Bride accompanied by live sword fighting and Secretary hosted in association with leading fetish club. Special event screenings will take place throughout the festival and across Glasgow with further titles to be announced in January.

Teen vampire chiller The Lost Boys – celebrating 30 years since its 1987 release –screens as the GFF “secret location” event on Friday 17th February in association with Empire magazine. Audiences will be bussed from Glasgow Film Theatre to a mystery pop-up cinema - vampire fangs will be provided, although audiences are advised to bring their own garlic. The event follows the sell-out success of last year’s “secret location” screening of Con Air, which took place in an airplane hangar on the outskirts of Glasgow before an audience kitted out in orange jumpsuits.

Also marking 30 years since its release is Rob Reiner's irresistible adventure The Princess Bride, packed with quotable lines and derring-do. GFF will toast this all-time family favourite with a screening event that will include swashbuckling live sword fighting and a fiendish treasure hunt for all ages to enjoy.

Allison Gardner, Co-Director of Glasgow Film Festival said, “We are excited about this year's special events programme, and thrilled to be able to announce these events in advance. We can honestly say that GFF is continuing to create unique cinemas events around some of our audiences best-loved films in terms of events venues, content and reach. There truly is something for everyone in this year's programme – from kids favourites to cult classics – all across the city!”