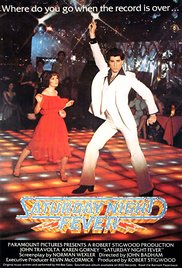 Our small band of Gunters here in The DreamCage universe are reviewing every film mentioned in Ernest Cline's Ready Player One. This week Susan Omand takes a walk on the wild side with Saturday Night Fever...

It's that iconic walk down the street at the start of the movie that sets the whole tone for Saturday Night Fever. You get the rhythm of the feet on the sidewalk exactly matching the Bee Gees theme tune, you get the cockiness of the strut and the arrogance when handing over cash to the vendors to buy a pizza or order a shirt that says this guy knows what he wants and he knows how to get it. But look carefully, his eyes are always on the move, always checking out other people whether overtly or surreptitiously and there’s that slight nervousness on his face, whether acted or real, that tells you that, deep down, he believes he’s going to get found out some day. But that only lasts until he’s back in the hardware store where he works as a clerk – and that is the true comfort zone of Tony Manero.

You see, Saturday Night Fever is not a film about dancing. Well it is, in that there’s dancing in it, but the disco is just the “arena” for one of the battles that Tony has to fight – Saturday Night Fever is a film about the fight. Straight from the off in the film there are fight references, the posters of Bruce Lee, Al Pacino in Serpico (a nice nod to the screenwriter, Norman Wexler) and, ironically given that Stallone later directed the much maligned Staying Alive, Rocky. There's the fighting that Tony has to deal with at home between his parents, the fight he constantly has to be "good enough" in his mother’s eyes, who only seems to love her other son, Frank Jr "the priest", the competitiveness on the dance floor, even when there doesn’t have to be, the assertion of authority of Tony among his gang of buddies. Tony Manero is seen as the typical alpha male and is shit scared of the fact that he has to uphold the reputation.

A lot of people forget how brilliant John Travolta is in this film. Never mind Pulp Fiction. This, for me, is his De Niro moment, it’s the film that made his career and moved him from horror film bit part actor into the big time and, to be honest, I don’t think his acting ever reached these heights again. There is a raw honesty, subtle depth and believability to his portrayal of Tony Manero that he lost with his choice of film roles that followed.

The other thing a lot of people forget too easily is that Saturday Night Fever was originally an 18/R certificate and when you watch the full version of the film it’s easy to see why. This isn’t the sugar coated feelgood musical pap that the one clip of Saturday Night Fever that they always show on TV of John Travolta in a white suit on a disco floor of flashing lights. It's also not the tame and fluffy PG cut of the film, 121 changes made purely for money to harness the kids who were buying the (albeit incredibly cool) soundtrack album.

No, Saturday Night Fever is 18/R rated for a reason. It's life at the sharp end in Brooklyn for an Italian teenager in the 1970’s. It’s sex and drugs and music and racism and homophobia. It’s religion and rape and death and gangs and violence. Most scary of all though, it’s stepping outside the comfort zone of expectations as son, brother, leader, friend and learning to walk your own path your own way.