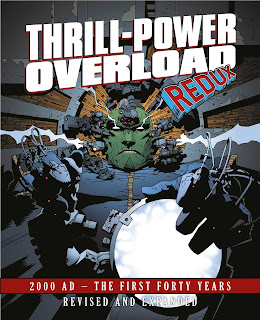 Revised, expanded and a must have for 2000AD fans, the definitive history of one of the world’s most influential comics is released in hardback next month...

With more than 140 pages of fresh content, the brand new hardcover edition of Thrill-Power Overload is being published on 9th February to coincide with the celebrations marking 2000 AD’s 40th birthday on 26th February.

This edition brings the story of 2000 AD bang up to date - from its humble and rocky beginnings in February 1977 to its current position as the self-styled ‘Galaxy’s Greatest Comic’, Thrill-Power Overload charts the incredible history of this ground-breaking title.

Told by the people who were there, this is the definitive history of the comic that launched a thousand talents including legends such as John Wagner, Pat Mills, Alan Moore, Neil Gaiman, Carlos Ezquerra, Brian Bolland, Dave Gibbons, Mick McMahon, Grant Morrison, Kevin O'Neill, Simon Bisley and continues with 21st Century breakthrough talents such as Jock, Rob Williams, Andy Diggle, Al Ewing, Henry Flint, Frazer Irving - and many, many more.

From the burst of iconoclastic energy following its predecessors – the violent Battle and the controversial Action – 2000 AD survived editorial conflict, strikes, walkouts, arguments, and changing tastes to foster generations of talent who have gone on to have a profound effect not just on comics but on Western culture itself.

Further 2000AD birthday celebration events include a special life drawing event in London on 5th February and two exhibitions of original artwork in London and Margate as well as the (now sold-out) 40 Years of Thrill-power Festival on 11th February.