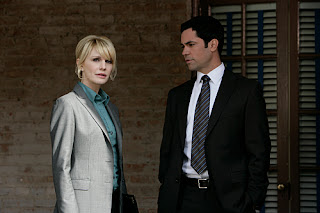 In a series of articles, Susan Omand and Steve Taylor-Bryant are going to remember the policemen, spies and criminal specialists that entertained them over the years. This time Susan dusts off the file on Cold Case...

I love the concept of Cold Case detective work. These murders that the cops never quite get the right lead on at the time, or they follow a track just to come to a dead end and sit, gathering dust until a new piece of evidence comes to light that means the case can be re-opened and re-examined, even decades later.

So it was with the eponymous series that ran between 2003 to 2010 from the stable of Jerry Bruckheimer. Each episode in the 7 season show covered a different case, reopened by the Cold Case squad in Philadelphia PD. The team, under the management of Lt John Stillman (John Finn), was headed up by Philly PD’s first female detective Lilly Rush (Kathryn Morris) alongside her partner Scotty Valens (Danny Pino, who went on to Law & Order SVU after the end of Cold Case), time served cops Nick Vera (Jeremy Ratchford) and Will Jeffries (Thom Barry) and the feisty Kat Miller (Tracie Thoms) who became a regular on the team after a complex narcotics case involving the murder of a POW.

What made this series different enough to capture my attention though was the way that each episode was presented. It always started off back in the day, whichever era it was, showing the lead up to the original crime as it is committed, although it never revealed the murderer at that point. I loved that they didn’t restrict the original eras – there was everything from a couple of years before the present day right back to the 1920’s and 30’s and they changed the filming style, as well as the soundtrack, to suit the era, even filming in black and white for the real old ones, so it really felt almost like found footage and added a sense of authenticity. They kept this link to the past going throughout each episode too, with flashes of how characters being interviewed in the present day looked at the time of the crime. This was especially effective because the casting of each “past and present” character was absolutely spot on – for example, you could really believe that the kid grew up to be the adult. This flashback effect came in to its own at the end of each episode in a montage which, for some reason and without fail, always brought tears from me. The murder from the past gets shown and the, inevitably caught, murderer gets led away by the detectives in the present day, to the soundtrack of a great song from the relevant past era. They are always obscured for a moment, whether by a pillar or a person or something and, when they re-appear, they are how they looked at the time of the crime. The case box then gets refiled, with Closed written on the lid, and there's a glimpse of the murdered person standing in the background, fading out as the detective looks at them. Cheesy yes but damned powerful.

Each season also had a longer story arc for continuity, usually involving the personal lives of one of the team of detectives, but it was the weekly cases, the beautiful portrayal of these mysteries from long ago, that kept me watching the show for all seven seasons.