Comic - The Power of Tank Girl 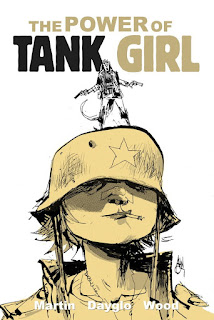 The Tank Girl comics available as a Humble Bundle (for another week) reminded Steve Taylor-Bryant of this collection of his favourite weapon brandishing female comic character, and swearing, with NSFW words beginning with C...

I love Tank Girl. I love the art, the stories, and if I am completely honest, I even love the Lori Petty film. It's not because Tank Girl is some kind of female role model in a man's world as she was once described to me, it’s because I love a strong character of any persuasion. Besides, anyone with a tank should not be classed as a role model, what’s wrong with you?

The Power of Tank Girl incorporates The Gifting, Visions of Booga, and The Royal Escape. Written by Alan Martin, with art by Rufus Dayglo and Ashley Wood this is nearly 300 pages of beautifully drawn and scripted elegance.

The Royal Escape is first up and to be quite honest I think you need to be a bit of a Tank Girl addict to enjoy this. It wouldn’t have been my choice to start a collection with this story. It is fantastic for me as I have a grounding in the insanity, the language, the characters and the violence, but a potential newcomer to Tank Girl may well struggle to find some enjoyment in the story. But a review is a personal thing so who cares about newcomers? As the T-Shirt says "Frankie says you’re a cunt". 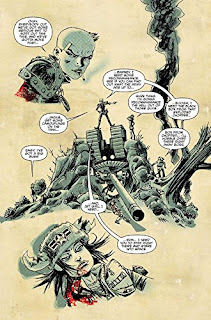 Dotted throughout the book are old classic Tank Girl strips, posters and info pages on Booga and the gang and just seeing the tank in full racing livery got my pulse racing. The second main collection in the novel is Visions of Booga. The storyline of Visions is nuts. A prison escape followed by falling from a plane, Booga gets a long lost brother, and so and on. Visions of Booga is a lot more understated than The Royal Escape, leaving unwarranted gory violence for more of a soft story, but fantastic none the less.

Then we come to The Gifting...

“I’m a whole different kind of cunt from what you’re used to dealing with.. I’m from The League of Extraordinary Cuntywomen.”

The Gifting is more of what an outsider might imagine a Tank Girl comic to be like, however the art is a complete change from what you may be used to. The older classic strips like The Dogshit in Barney's Handbag, and X2-38 make this more than just a few comics in a hardback book, it makes it an essential own for a Tank Girl collector.

A solid collection, a great buy for avid fans and those who like something different (mainly bad language and extreme violence) in their comic collection.