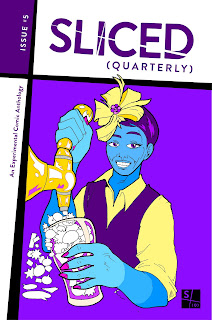 Steve Taylor-Bryant takes on the experimental comic anthology from Sliced (Quarterly) and its editor, Ken Reynolds...

It’s a rich time to be a fan of art and artists at the moment. That is, if you are willing to go beyond the usual superhero stuff produced by the big comic companies and allow yourself to delve into the more independent releases. Companies like Alterna and Madius Comics have taken up a fair few column inches on this site, I am a huge fan of the different, and so when I got the chance to take a look at something new I jumped at the chance. Sliced (Quarterly) #5 is billed as ‘An Experimental Comic Anthology’ and sadly I have to agree. Sadly? Yes, it shouldn’t have to have ‘Experimental’ anywhere near it! If you like independent comics, follow some writers/artists/letterers outside of DC and Marvel, then you are actually quite used to the styles you’ll find with Sliced. To me it's not experimental, it's just good art. That, however, is maybe an argument for a later day.

After a brief rant about the turning of time and the blame the year 2016 got and a thank-you and some excitement for 2017 from Editor, Ken Reynolds, the anthology opens with a great and humorous look at being left handed from Bryony Thomson, which instantly gives you the feel that this book is going to be a great read. The next, and a few pages, contain art by Gareth A. Hopkins. These are abstract, these are not your usual fayre, these are sublime. Along with the wordsmiths David Thomas on Etymophic, Daniel Willcocks on Unful, Tony Esmond on Downwardly Mobile and JP Power on Gruaig, Hopkins has produced art, like proper art, the kind you would go to a gallery to view, or to a shop to buy (Gruaig with the added colouring should definitely be for sale as prints or posters, I’d buy them) and the abstract nature really appeals. It's both refreshing and incredibly pleasing to see this level of work in something that you would describe as a comic book.

Other notable inclusions, I enjoyed everything but some things stood out more, were Tense by Pablo Iten and Ktaiwanita which was beautiful to look at, and Uyp Jawwy from Maximilian Meier and Daniel Ableev that had a watercolour effect to it that, along with Reynolds' lettering and editorial redactions, made for something almost exotic for a comic book and was favourite of the more conventional offerings (conventional is probably the wrong word but you all know what I mean right?). Short science fiction style story from David Thomas 00110001 entertained and I really enjoyed the weirdness in David Loses His Head from Mikael Lopez and Julian Adkins.

Complete and utter favourite though and worth more than whatever price the book costs is the almost Terry Gilliam style art of Saffron Knight’s entitled Pink Radio Head which, if it was actually a framed work of art, would almost certainly adorn my wall.

I could imagine some would struggle with Sliced. Personally though, it’s a highlight of 2017 already for me and Ken Reynolds and his project are now on my watch list alongside Alterna and Madius and, whilst that may mean nothing to you, it’s the highest honour I can bestow on a publication.

All 5 Issues of Sliced (Quarterly) are currently available to download FREE at slicedquarterly.co.uk
Email ThisBlogThis!Share to TwitterShare to Facebook