Doctor Who - The Keys of Marinus 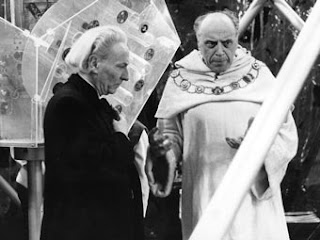 Our Doctor Who expert, Tony Cross, is journeying through all of time and space to bring us his thoughts on every available Doctor story. Today is the First Doctor adventure The Keys of Marinus...

It's a collection of separate adventures loosely tied together by a quest. In this case the quest is for the McGuffins Keys of Marinus. These keys are valuable components of a massive computer, THE CONSCIENCE, which is supposed to keep Marinus in a state of cuddly loveliness.

Part One sows the seeds of the adventure. There's a glass beach and an acid sea. There's a mysterious set of men flopping about in wetsuits and flippers falling through hidden doors and then there's Arbitan. Arbitan is the man who built THE CONSCIENCE. It apparently needs re-booting but to do that means finding the 'keys', which I'm going to pretend are basically some kind of glorified memory sticks to be slotted into THE CONSCIENCE's USB ports.

Arbitan is played by George Coulouris, who was probably the first impressive piece of guest casting based on his career. Even if he does only last an episode. Er, spoiler. He wants the TARDIS crew to help him find the keys, which have been scattered across various locations on Marinus and forces them to do so after they initially refuse. Hand their Blake’s 7 wrist travel dials, course pre-plotted in advance by Arbitan, off they go.

On a series of budget stretching episode-by-episode adventures. We see the City of Morphoton, apparently a paradise but with a nasty little secret at its heart. This is my favourite episode. Jacqueline Hill gets to be marvellous. There's some brains in jars. Sort of. And William Hartnell and William Russell get to admire a rusty old mug. They're joined at the end of the episode of Altos (Robin Phillips) and Sabetha (Katherine Schofield).

Altos was one of those sent by Arbitan to fetch the Keys but got waylaid. Sabetha is Arbitan's daughter. They come across like a pair of Noel Coward character actors have wondered into the building by mistake, which I think becomes especially annoying in the final episode.

The Doctor splits the party up so that William Hartnell can take a holiday. He skips ahead two keys...at least I think that's how it works. Whilst the others go on.

Part Three finds us in the 'Screaming Jungle'. It's creepy, initially. Then it all gets a bit silly. The problem with this story as a whole is lots of people behave in a very stupid fashion. They also seem to delay acting on anything for about five seconds after it becomes obvious a thing is going to happen. Instead they stand there as if waiting for a cue. It's all a little aggravating. And poor young Carole Ann Ford only gets to stand around being scared and looking for a hug. I wonder whether this was the point at which she decided enough was enough. Finally we get Edward Warwick putting in a heroically theatrical performance as Darrius.

Moving on it is time for snow. And Wolves. And potential rapists. This is an odd episode. There's a lot of bad design going on. Sets that look like sets. A gorge that looks easily jumpable in a story by the same writer who had his characters jump over a far wider looking gorge back in The Daleks. It's almost as if Terry Nations got a gorge obsession. Susan is particularly jumpy in this episode too. To the point of irritation.

What does make this episode feel genuinely dark though is Vaslor, played by Francis de Wolff. Vaslor is a nasty man and at one point in the episode clearly has his mind set on raping Barbara. It seems a particularly adult theme for a television series for families. I suspect you'd find it difficult to do anything like that in New Doctor Who. And Francis de Wolff is actually pretty good at being creepy and menacing. It's still a bit uncomfortable.

Having recovered the key from a giant ice cube we find ourselves in the city of Milennius where Ian is set-up for a crime he didn't commit. Barbara and Susan get to play Detective, Sabena and Altos get to be research assistants and The Doctor gets to play at being Rumpole of the Bailey. Hartnell's excellent at this. He's sussed the whole plan out from the start and - despite a hiccup here and there - he eventually gets Ian free, rounds up the suspects and makes the forces of law and order look a bit amateurish. It's Sherlock Who.

It all ends happily but not before Ian gets to show off and Yartek, Leader of the Alien Voord, gets his comeuppance. THE CONSCIENCE is buggered but as The Doctor isn't convinced that letting a computer make people good by effectively programming them to be good is the right thing he isn't too disappointed. Sabetha and Altos head off in the sunset hand in hand* and the TARDIS crew dematerialise for further adventures in time and space. Or should that be space and time.

I have to admit to liking this less on this re-watch than last time. It's all a bit untidy. It has some wonderful moments but not enough of them to make this a great - or even good - story. There are lots of theatrical performances from guest stars, although I should mention Fiona Walker's Kala and Donald Pickering's Eyesen as being pretty good.

Fundamentally though I think its Nations inability to give Ian, Barbara and Susan the brains they obviously have that annoys me. They're constantly blundering into obvious traps. Or standing around gawping whilst a terrible weapon is about to cleave their heads from their shoulders.

So alas this becomes the first Hartnell story to be a bit disappointing.

O well. Next up, The Aztecs.