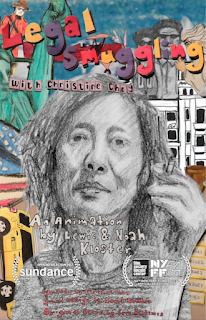 Susan Omand smuggles in a short film review as she watches Legal Smuggling with Christine Choy from Lewie and Noah Kloster...

I’m always amazed and delighted at how much short films can pack into their time on screen, whether it be to tell a linear story, to create an emotional response or to experiment with new ideas or visual concepts. Legal Smuggling with Christine Choy is a very short short indeed, clocking in at only just under 4 minutes, but manages to include all of these and you are definitely entertained for all of those minutes.

As the price of cigarettes become astronomical in New York City, Academy Award nominated filmmaker, Christine Choy, goes the extra mile to secure her favourite brand. Bouncing from one airport to another, her duty free cigarettes get lost in the shuffle, forcing an attempt at smuggling.

This film is very clever in a lot of ways. Firstly the animation – Christine herself is hand drawn in pencil on cut out pieces of paper, collaged together with photographs and drawn backgrounds before being recorded using stop frame animation. It makes no pretence at being a CGI ridden polished “studio” production and, to my mind, is by far the better for it as it would lose a lot of the fun. I loved the representation of Canada and the use of cotton wool balls for the clouds and smoke was absolutely inspired! Secondly, the soundscaping is pitched perfectly with the little incidental noises, like clinking glasses, shop muzak, traffic, alarms and so on giving the film a sense of place in a bigger environment than we can see. But the thing that makes this film is the story itself. It is hilarious, if highly illegal, made even funnier because of the way Christine Choy tells it. She is a natural raconteur, you can hear her eyes sparkle with mirth as she speaks, and this is a personal story of something that I can believe she actually did, told in a way that it would be at a dinner party or in the pub over a glass of wine.

The level of innovation and experimentation that I’m seeing in the short films coming through festivals now (this one will be at Sundance Film Festival, which starts next week) is incredibly heartening for the future of both film-making and animation and I’ll be on the look out for more from this production team.