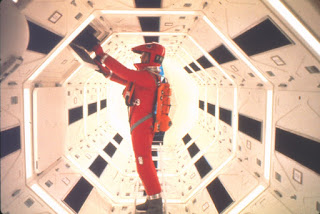 Our small band of Gunters here in The DreamCage universe are reviewing every film mentioned in Ernest Cline's Ready Player One. This week, Steve Taylor-Bryant checks in with mission control to watch 2001: A Space Odyssey...

"It can only be attributable to human error"

I was going to start this look back at Stanley Kubrick's science fiction masterpiece with the statement "This is pound for pound the greatest science fiction film ever made". Then I realised you'd want evidence, so I looked at the numbers... you made me do maths you horrible people... and I determined that:-

So basically 2001 A Space Odyssey, if made in the last five years, is the equivalent of , well... Signs or Space Cowboys. All the half decent blockbusters that took, roughly speaking, the film 2001's inflation adjusted takings, like Independence Day 2, Mad Max Fury Road and Star Trek Beyond, all had budgets at least twice the one at Kubrick's disposal. So already my 'pound for pound' argument is a winner. Let's face it, 2001: A Space Odyssey is far superior in scope, storytelling, special effects and character than the aforementioned films. But...

2001: A Space Odyssey wouldn't get made today. Society has failed Kubrick's genius. When you watch 2001, it takes patience. It requires a little intellect and, most of all, it needs the audience to imagine the era in which it was made. It was released before man had set foot on the moon, something that society doesn't really care about now. It was made before CGI was even a thing. It has a computer as its main antagonist and yet it would be almost two decades before a computer was affordable to most homes. It also has very little action and very long scenes. The modern day cinema audience won't watch a ship dock for 15 minutes whilst some 200 odd year old classical music plays in the background. They get their goosebumps from Dwayne Johnson or Jason Statham blowing stuff up.

2001: A Space Odyssey was so far ahead of its time I don't believe it's ever had its time. Gone are the days where beauty shone from a cinema screen. Gone are the days where soundtracks from great contemporary composers can be discarded for the classics. Kubrick had Alex North of Spartacus and Dr. Strangelove fame write a score but decided instead that his working music by Strauss et al helped the scenes and the audience more...

"However good our best film composers may be, they are not a Beethoven, a Mozart or a Brahms. Why use music which is less good when there is such a multitude of great orchestral music available from the past and from our own time? When you are editing a film, it's very helpful to be able to try out different pieces of music to see how they work with the scene...Well, with a little more care and thought, these temporary tracks can become the final score."

I'm as much to blame as society in general for our dumbing down of brilliance. I don't like the 2001 source material, Arthur C. Clarke's book is too long and complicated for my patience, yet I marvel at Kubrick's vision. We, as an audience, get what we deserve and, whilst I like to think I've proved 2001: A Space Oddssey is the best pound for pound science fiction film ever made, maybe generation after generation of looking for a quick action fix and negating the thinking part of our brain means we only deserve Independence Day 2?

I like to hope I'm wrong. Arrival, The Martian and Gravity all required a smidgen of thought on the viewers behalf, helped a little by action, and Duncan Jones phenomenal Moon I hold in the same regard as 2001. Maybe, after nearly 50 years, Kubrick's film is finally changing the cinema audience. Maybe all the directors that watched this film as young children, aspiring to be filmmakers, are beginning to bleed through into the dumb studio era. Maybe we should just all go and watch it again and see if we become a little smarter, a little more patient. Maybe 2001: A Space Odyssey's time is now.