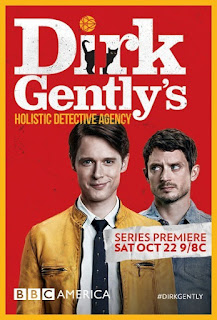 Everything is connected for Steve Taylor-Bryant as he watched the first series of Dirk Gently's Holistic Detective Agency on Netflix...

Dirk Gently's Holistic Detective Agency (or "you had me at Richard Schiff's eyebrows") from Netflix is going to divide opinion. It's going to charm a few folk, disgust others and, for a few of us, those that embrace a new take on our classic favourites, it's going to be some of the best television we've seen in a while. It really is though. Evidence? Casting, writing, direction, humour, weirdness, Richard Schiff's eyebrows.... the list goes on. It's not what you would imagine a conventional take on Douglas Adams work would look like, I've never met Adams but I'm sure he wouldn't have included so much violence in his work, but just because it isn't a word for word re-enactment doesn't make it bad. It's the essence of Douglas Adams but with some creative license and I really don't mind that.

When I wrote about my excitement for this project a while ago, I stated that two people would make this work, Max Landis and Elijah Wood, and I was sort of right. Landis' grasp of Adams' source material is evident but he has added a cinematic, Hollywood gloss to proceedings that we just didn't get with the brilliant yet short lived BBC version starring Stephen Mangan. Landis has certainly Americanised the dialogue and story but not to the extent that some feared. It's incredibly watchable from a storytelling perspective which, when you add in some great casting, makes the show stand out from your usual episodic television. Elijah Wood, as Todd, is the guy that glues the whole thing together. Whilst every other character seems to have some brand of insanity to play out, Todd is the straight guy and Wood is his usual brilliance, allowing himself just the right amount of star billing scenes but more for standing back and letting the other guys bounce their madness off him. He soaks in what could be too much and reacts to what is just enough to make the delivery funny, especially when alongside Samuel Barnett as the titular detective. Barnett verges on too British and too mad but, with Wood keeping his performance in check, the double act just works.

I understand those who are venting on social media about the destruction of something sacred but I don't see it myself. I see bravery at every turn in the casting, writing and production. And I see Richard Schiff's eyebrows everywhere... 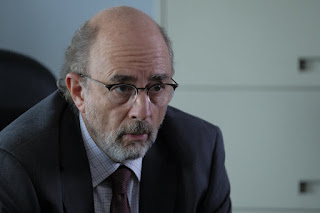