TV - What If? Grange Hill: Redux 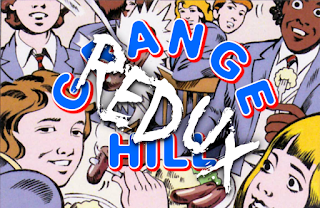 Taking a look at what should have been, could be or simply would make an interesting idea. There are so many possibilities... so what if Steve Taylor-Bryant remade Grange Hill...

I realised today that my friends are all slightly strange. Karl Wishart, a good buddy and ‘day job’ colleague, suggested to me a remake of Grange Hill and a few conditions and here I am writing about robots, holocausts and teaching woodwork. You see Karl’s vision was a great idea and he gave me a fair bit to work with. I have a title – Grange Hill: Redux. I have a list of characters that must be included (we’ll get to them in short order), and I have the rough scenario of events that lead to episode 1. If you like this idea and want to buy the vision then it’s all mine, if you hate it and think trolling is required then you can find Karl on Twitter @karlwishart. Here we go…

The year is 2039 and Great Britain is just recovering from the nuclear holocaust that occurred seven years previously. London, now a shell of the capital it once was, has decreed that survivors’ children should be educated and any child that attends the special schools, built within the remains of warehouses and factories in the old inner city, is exempt from the workhouse until they are of school leaver’s age. Lessons are not dissimilar to ones we had when I was child, woodwork, metalwork, mathematics, history, but gone are the softer options of media studies and music. In their place are essentials for bettering life as the country seeks to recover. Hunting and foraging, cooking and menial tasks like sewing and basic robotics are the way to get ahead, the way to finally find work outside of the destroyed metropolis and maybe earn some real money instead of food and clothing tokens. Work in the meccas of Bristol and Leeds that, somehow, weren’t affected by the nuclear catastrophe. It is essential to the government of the day that discipline is kept and a workforce is educated. They also don’t want rumours of what may have caused the disaster to be dwelled upon so all history related studies are regimented by the controllers of the fledgling schools, The Department for Urban Welfare, headed up by the tough survivor of the old regime Dawn Frobisher (Grange Hill head from the original series, Gwyneth Powell). There is no network of electronic communication like the era before them, no mobile devices or world wide web and, with a lot of the paper history destroyed, the DUW and the Government can rewrite the nation’s history with their propaganda machine. The teachers are androids, pre-programmed to teach only the DUW’s wishes.

The first school to open, with little fanfare, was Grange Hill. Run by Mrs McClusky (Keeley Hawes) and her Deputy Droid, Bronson (Malcolm McDowell), season one of the post-apocalyptic education drama will follow a group of students desperate to avoid the workhouse but not necessarily completely enamoured by the idea of learning. Tucker Jenkins, Stewpot Stewart, Pogo Patterson, Suzanne Ross, Gripper Stebson, Jonah Jones, Zammo McGuire, Roly Browning, Ziggy Greaves and Precious Matthews are thrown in to the deep end, learning to read and write whilst their families depend on them for credits to clothe and feed everyone in their rooms. Drugs are rife, with SynthFire a particular nasty and addictive substance, and many students have their lives either directly or indirectly affected by addiction to the uranium based narcotic. McClusky and Bronson try their hardest to keep order but the students do have some supportive androids on the staff. Histrionics and robotics tutor Bullet Baxter (Robbie Coltrane) keeps his lessons entertaining and always manages to grab the attention of the children, and ‘The Caretaker’ Mr Griffiths, an undercover agent from the Mysterious North (Will Mellor) becomes the children’s confidante. He may have started at Grange Hill on a reconnaissance mission but the children touch his heart and he tries to help as many as he can, especially those ravaged by SynthFire addiction.

As you can see, as I’ve written a brief overview of what to expect, a lot of the problems that the children will face are the same as the ones they encountered in the original BBC show. Drugs, bullying, differing staff and friend relationships are all common issues in schools and I think that, even within the post-apocalyptic setting, the programme would be able to speak to its viewer in the same way the original spoke to me. I’m setting writer Joe Lidster the job of writing/showrunning the relaunch of Grange Hill as Joe is a writer I admire immensely and his work on Torchwood, Sherlock, Doctor Who and his fantastic work on the audio series Dark Shadows should stand him in good stead for the step up to main man. Rachel Talalay is one of my favourite directors and so each episode will be overseen by her genius eye for portraying a story. Talalay has an incredible back catalogue of work including Sherlock, Supergirl, Doctor Who and Supernatural, but it is her direction of my favourite all time comic book film, which happened to star Mr Bronson himself Malcolm McDowell, Tank Girl, that shows me that the right level of edge and humour I would need from a Grange Hill in this scenario is possible.

So there we have it. Karl had a dream, I am making it a reality. Either that or we both drink too much.