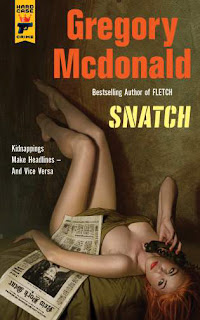 Steve Taylor-Bryant doesn't need to be held to ransom by Titan Books to read the kidnapping stories in the Hard Case Crime book Snatch by Gregory McDonald...

Older books you may have missed being repackaged for a modern day release is a great idea. I love them. Hard Case Crime do them best. I've enjoyed many of the titles I've discovered in the last few years and are all books that I'd never heard of or probably wouldn't have searched out in my local bookstore. Snatch from Gregory McDonald is the latest to fall on my desk and the hardest for me to review as it's actually two books in one. Strangely though both stories, whilst vastly different, work well thrown together under the one title.

Originally published as Who Took Toby Rinaldi in the late seventies, the first story is one of political intrigue and that age old problem of oil. Whilst the story may feel dated in places, the use of an Ambassador, his family and oil supply in the Persian Gulf seems modern enough, almost timeless, and the distrust of those chosen to help in the search for a child is what stands out in a very well written piece. It has a little humour and whilst, isn't maybe as satirically satisfying as McDonald's Fletch books, it is a brilliant standalone story by a great author. The second story though is very different.

Again retitled from its eighties moniker of Safekeeping, the abduction story this time takes place during the Second World War. Robby loses his house and parents during a bombing and is moved from his private school to New York City to live with a reporter uncle but he goes missing within the city that never sleeps. McDonald uses a different style from the first story and the British sections of Robby's life sometimes read a bit like Dick Van Dyke trying to be English but it's still quite a pleasing read.

Both books may be under one cover but the subject of kidnapping binds them together. Whilst Snatch may have more modern social commentary than Safekeeping's more period elements, both stories have enough edge of the seat stuff to work as thrillers and both also contain McDonald's dry wit and almost sarcastic view on life. Neither story is as good as the Fletch and Flynn books but if you are a fan of McDonald's or Hard Case Crime in general then it's definitely worth giving some time to it.