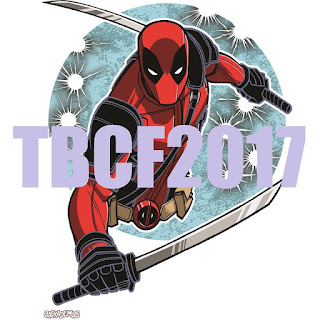 We tore The Defective Inspector away from his computer screen for a day and made him go out and interact with people (yes, REAL people) at True Believers Comic Festival...

After the sh*tstorm that was the year 2016 I was ready to do something fun and vibrant in 2017. After such a fantastic time last year, I was begging for a chance to go around and speak to the people, the vendors, the cosplayers and of course the artists of the creative universe by attending TBCF. So how did this year compare to last year? Read what I said last year and then come with me on a magical…text…based… Just keep reading.

First, I was wise enough to bring my partner with me this year (Yes that’s her, don’t be too surprised she’s attractive…). She is a complete neophyte to comic festivals and, since she poisoned me last time, I felt compelled to retain my functioning liver. She was my “innocent” opinion to see if the "anyone is welcomed" approach had continued into 2017 and boy did it. The people were friendly, the atmosphere was warm and every single person I interacted with were just so… nice. There is no better word for it, everyone was so nice! My beloved was so happy with the whole event the moment we walked back into our flat she went full vlog. I am so happy I brought Mel here to take her cosplay virginity away as she is eager to do it again! But onto my opinion…

I noticed a few changes in the organising. When it came down to the panels and stalls the talent and styles was much… broader. It wasn’t that last year was running on one track but this year I didn’t see two stalls the same, the talent and styles were so varied. In terms of panels I got to see new emerging articles through “Discover Something New” and I chatted with Rachel Smith and Chris Imber before they took to the stage and discussing “Awesome Comics”. Once again I struggled to attend all of the panels but that was partially down to my affinity to chat with stall runners. I’ve always felt these guys are the best way to uncover talent I’d never see anywhere else. When it comes to indie comics and emerging artists, TBCF is the place to be.

Keeping with tradition I went in a subtle cosplay. I dressed as Jim Henson, the puppet master of Muppets past, and would get people out of no where complimenting me despite the fact there were infinitely more impressive cosplayers wandering around. I maybe a sour bitter gamer goblin but the accepting nature and friendly attendees is one of the key reasons why I go to TBCF as I feel at home amongst my geeky kin. It’s like a great big nerdy hug.

Speaking of cosplay again I must give the nerd war cry to the people and the events organised around grand art of dress-up. It’s not my tastiest cup of a tea, I barely enjoy wearing trousers, but I cannot help but love the creative skill of people dressing as some of my favourite comic book characters. The promotional catwalk and running workshops throughout the day support the pillar of the comic festival community and I never felt there was any kind of snobbery. If the comic was old/new or eastern/western art, it didn’t matter. All that matters in TBCF is you enjoy yourself, the best rule ever enforced.

There is one more thing I need to say. There was food this year! A really odd criticism I heard from attendees last year was a severe lacking in savoury food throughout the event. This year there was both sweet and savoury stalls on show scattered throughout complex, beyond that there appeared to be better support from the café shops built into the venue. I primarily mention this strange observation because there is a sign of improvement and feedback taken on board. This just shows us, the attendees, that the kind of people who run this event care about our opinions. I’ll admit it’s a rather stupid thing to talk about when reviewing an event but I am a well establish “hangry” man and this year I was more… What word occurs when mixing fat with happy? OH! OH NO! No… No. I was not THAT happy.

While this was my 2nd time coming it was the 3rd time the event has been run since the initial Kickstarter in 2013. What I am sensing from TBCF is a growing community which is starting to snowball. A reminder that for 2 years in a row I’ve been spoilt for choice and it makes me wonder what the future holds for TBCF. Whatever expansion plans are set out in the future I can say this; currently it is my favourite geek gathering event and I primarily play PC Games, that’s saying a lot!

Buy your tickets for NEXT YEAR'S Festival now!

Images from the Facebook of TBCF, DC photo and Trev Pickstock
Email ThisBlogThis!Share to TwitterShare to Facebook