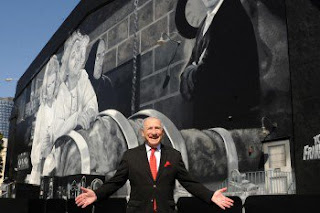 Mel Brooks is "whelmed" to be honoured with the BAFTA Fellowship, to be presented at the EE British Academy Film Awards this Sunday...

The British Academy of Film and Television Arts will honour Mel Brooks with the Fellowship at the EE British Academy Film Awards on Sunday 12 February. HRH The Duke of Cambridge, as President of BAFTA, will present the award.

Mel Brooks said: "I am not overwhelmed, but I am definitely whelmed by this singular honor. To be included among such iconic talents is absolutely humbling. In choosing me for the 2017 Fellowship I think that BAFTA has made a strangely surprising yet ultimately wise decision."

Amanda Berry OBE, Chief Executive of BAFTA, added “Mel Brooks is a truly unique and multi-talented filmmaker. We are absolutely thrilled to award him the Fellowship, the highest honour of the evening, at this year’s EE British Academy Film Awards.”

Mel Brooks’ legendary career as an actor, comedian, filmmaker, composer and songwriter is illustrated through his multiple awards, spanning many decades, making him only one of 12 individuals to have won an Emmy, a Grammy, an Oscar and a Tony Award.

In 1950, Brooks had his first break in the entertainment industry as a writer for the variety comedy series Your Show of Shows alongside co-writer, Carl Reiner. This led to their successful comedy duo collaboration with cult skit The 2000 Year Old Man, followed by the release of several albums in the 60s and 70s and a Grammy win in 1999 for Best Spoken Comedy Album for The 2000 Year Old Man in the Year 2000.

Brooks first earned BAFTA recognition in 1964 for three minute short The Critic, which shared its Animated Film Award, an honour that was at that time open to works of any length.

Subsequently, he co-created spy comedy series Get Smart with Buck Henry, starring Don Adams, which ran from 1965-1970 and garnered a total of seven Emmy Awards.

Brooks’ feature film directorial debut, The Producers (1968), won him an Oscar for Best Original Screenplay and was later adapted for Broadway, winning a record 12 Tony Awards in 2001. He later adapted the stage musical into a feature film, which was released in 2005 and starred Nathan Lane, Matthew Broderick and Uma Thurman.

In 1980, Brooks set up production company Brooksfilms and executive-produced David Lynch’s The Elephant Man, which won three BAFTAs for Film, Production Design, and Actor for John Hurt in 1981. Other films produced under his banner include: To Be or Not to Be (1983); Robin Hood: Men in Tights (1993), which he co-wrote and directed; and The Producers (2005).

As an actor, Brooks delivered a memorable performance in the critically acclaimed television comedy series Mad About You, winning three consecutive Emmy Awards for Outstanding Guest Actor from 1997-1999. In 2016, Brooks was awarded the National Medal of Arts, the highest award given to artists by the US government.

The EE British Academy Film Awards take place on Sunday 12 February at the Royal Albert Hall, London. The ceremony will be hosted by Stephen Fry and will be broadcast exclusively on BBC One and BBC One HD. The ceremony is also broadcast in all major territories around the world.

On the night, www.bafta.org will feature a live red carpet show as well as photography and winners interviews.