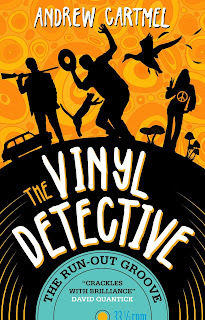 Tony Cross gets on the right track thanks to Titan Books and finds his groove reading The Run-Out Groove by Andrew Cartmel...

The Run-Out Groove is the second in Andrew Cartmel’s ‘Vinyl Detective’ series. Our – still nameless - hero makes his way in the world hunting down rare vinyl. In the first book, ‘Written in Dead Wax’ there had been international travel and femme fatales. One of whom, Nevada, stayed. She and the Vinyl Detective are now a partnership.

One of the pleasures of the new book is the developing cast of characters. Not just Nevada, but the slightly aggravating Tinkler, who seems to have the tact and diplomacy of Geoffrey Boycott, and Clean Head, who we met in the first book as a taxi driver and who has now become a semi-official member of the team.

Oh, and there’s Stinky Stanmer, the idea stealing celebrity jerk, who happens to be a ‘friend’ of the Vinyl Detective. If your definition of friend includes the sort of person who would sell you, your grandmother and their grandmother to make their way up the ladder of fame and glory. Stinky is most a ‘voice off’ in this book but plays a key role in events.

This time our heroes are called upon to find out what happened to the child of hippy, (possibly) nymphomaniac suicide Valerian. The child disappeared on the day of his mother’s suicide and Valerian’s brother wants to know what happened, but they tie this into a quest for a single that may (or may not) contain a hidden message.

What follows is an impressive quest for the truth involving a goose, the Half Moon (a pub where I have been and seen my friend Lorna’s band, Northsyde, play), a sister, cats (always cats), aural nerdery, Glen Miller records, a 60s photographer, a guitar legend, drugs and arrows. Not necessarily in that order.

And although it feels occasionally that our heroes get one too many lucky breaks, the book is damn good at making the clues visible to us as well as its heroes. Sometimes they miss a trick. Sometimes we do.

So, it should be obvious that I enjoyed this book immensely. Cartmel seems to have found – and forgive me – his groove with the Vinyl Detective series. I think partly helped by the fact that I think there’s an element of wish fulfilment in the character. Cartmel likes the Vinyl Detective so it is easier for us to. The best thing about the Vinyl Detective is that although like Jessica Fletcher he gets caught up in an unrealistic amount of murder and mayhem it doesn’t feel he’s strolling about in an unreal world. This is a world that feels like the real one. And one where the nerd gets the girl.

I recommend you give this series a go if you’ve not already. I can’t pretend not to have loved it and the people who run around in it.