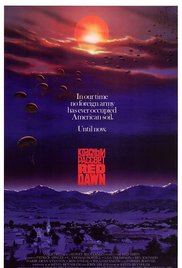 Our small band of Gunters here in The DreamCage universe are reviewing every film mentioned in Ernest Cline's Ready Player One. This week, Nate McKenzie is the last line of defence with Red Dawn...

The 1980s was an era permeated by constant worry of the threat of global war. World War II had only ended four decades earlier and the Vietnam War was half as old, and the Cold War wasn't officially over until the latter part of the 80s. The confluence of war-themed movies and a new crop of talented, popular young actors bred what might be the oddest war movie of the entire decade: Red Dawn.

A cult favorite three decades later, Red Dawn had more than a handful of the household names from that era of cinema. Patrick Swayze, Lea Thompson, Jennifer Grey, C. Thomas Howell, and the feature film debut of Charlie Sheen. Director John Milius saw fit to take all of those well-known actors and put them into a movie together. That wasn't exactly a novel concept, of course (John Hughes notably made his mark doing just that); but Milius had a different vision, telling the story of a group of small-town high school kids fighting back against a Russian invasion on American soil.

[Side Note #1: Milius, a close friend of the Coen brothers, was the inspiration for Walter in The Big Lebowski. Yeah, blew my mind, too.]

Red Dawn is a strange movie.

I don't mean the plot or theme or any of the cinematography; that is all well done, but linear and nothing new. Stories of war have existed since the very first war ended.

Red Dawn is strange because it took a fear that tugged at the guts of many Americans in that time and made it almost... believable, by propping up the heavy theme with budding young actors that the American public recognized and loved. It is a movie with a member of the Brat Pack, along with others who were, at the very least, Brat Pack adjacent, that gets serious about the threat of foreign occupation in rural Colorado leading to the start of World War III.

That is certainly not John Hughes' modus operandi.

Everything about Red Dawn is downright badass. I first saw this movie when I was in high school and the idea of a handful of high school kids fending off military invasion in their hometown completely lit my imagination on fire. It may not have elicited the same responses of teen brooding, awkwardness, and "this movie gets me" that a film like The Breakfast Club did, but there was still a strong emotional connection. Russians attacking my town and killing my Dad? Yeah, I wanted an eye for an eye for those feisty Wolverines!

[Side Note #2: The Wolverines from Calumet, CO are the only Wolverines I have ever, or will ever, root for. Go Buckeyes.]

Red Dawn is beginning to end action. In fact, when it was released, it entered the Guinness Book of World Records for "most acts of violence" in a movie. According to their calculations, 134 acts of violence occur per hour (2.23 per minute). For these efforts, Red Dawn also earned the privilege of being the first movie ever released with a PG-13 rating. More impressive than that is the fact that there are no computer graphics effects, chroma key composites or miniatures in the movie. All of the explosions are real and in actual size - including the fireworks between Jed and Toni (Swayze and Grey) who then lit up the screen in Dirty Dancing three years later.

[Side Note #3: PG-13 came in use because of parents' outrage over the "PG" rated violence in Indiana Jones and the Temple of Doom]

It may be "just another" war movie starring pretty faces to some people but there is a depth in the story that people tend to forget. One line in particular resonated with me when I saw it as a teenager:

"It's kind of strange, isn't it? How the mountains pay us no attention at all. You laugh or you cry... The wind just keeps on blowing."

Between the use of practical effects, the harsh conditions the actors endured for authenticity (intensive bootcamp training; Swayze getting frostbite in the sub-zero temps while filming), and the terrific performances by five of the 80s most iconic actors, it is easy to see why Red Dawn still holds up upon rewatching and has a firm place among the great cult films of all-time.